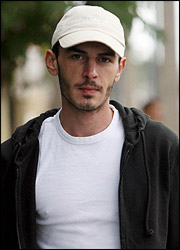 Georgi Dochev and Other Douchebags. Our douchebag of the day award goes to this guy. Who is this guy and why are we giving him our “much-coveted” award? His name is Georgi Dochev and we are giving him the award for his douchebaggy behavior of kissing and telling about his supposed s*xcapade with Stephen Gately’s boyfriend, Andy Cowles, at the time Stephen was dying alone in his bed.

OTHER DOUCHEBAGS FROM AROUND THE WORLD

Rick Santelli is a Douchebag Tool of the Koch Family?
01 March 2009

Here’s a Playboy article that examines the rise of Rick Santelli and how his supposedly “spontaneous” rants are part of a grand design of the Republican right-wing machine which may be linked to the Koch family. Here’s an excerpt from Playboy:

What we discovered is that Santelli’s “rant” was not at all spontaneous as his alleged fans claim, but rather it was a carefully-planned trigger for the anti-Obama campaign. In PR terms, his February 19th call for a “Chicago Tea Party” was the launch event of a carefully organized and sophisticated PR campaign, one in which Santelli served as a frontman, using the CNBC airwaves for publicity, for the some of the craziest and sleaziest rightwing oligarch clans this country has ever produced. Namely, the Koch family, the multibilllionaire owners of the largest private corporation in America, and funders of scores of rightwing thinktanks and advocacy groups, from the Cato Institute and Reason Magazine to FreedomWorks. The scion of the Koch family, Fred Koch, was a co-founder of the notorious extremist-rightwing John Birch Society.

We won’t be surprised if this Playboy report is 100% accurate.

Our Douchebag of the Day Award goes to ……. tararan….. BBC’s Clare Balding for stupidly focusing on Liam Treadwell’s teeth on the day he won the Grand National. Says our Douchebag:

‘Liam, just give us a big grin to the camera. No, no, let’s see your teeth. He hasn’t got the best teeth in the world, but you can afford to go and get them done now if you like.’

Oh Clare, that was totally uncalled for. You give journalism a bad name. You should become a dentist if all you care about is people’s teeth. Argh.

Congratulations to Liam for the win! 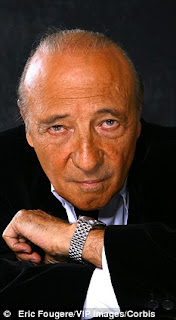 Yaaiks. This is probably the most idiotest, yeah we’re going to use idiotest, statement we’ve ever heard in a long, long time.

‘Everyone has a Rolex. If you don’t have a Rolex by the time you reach 50, then you have clearly failed in your life.’

For making that really stupid statement Mr Seguela, you’re our Douchebag of the Day.

In reaction to the above statement, this is what one of our fellow Famewatchers said:

That’s what we call in France “impunité”. While people demonstrate claiming for a little bit more money at the end of the month, mans like seguela, have “open doors” on TV, press, radio, for telling trashes about those people, that is THE French people.

They do respect only one thing : Money and people who can give it to them. In 1789, you could have seen their head at the end of a spear…

Our Douchebag of the Day award goes to Mark Kulkis of the L.A.-based adult film company, Kick Ass Films. Why are we giving Mark the Douchebag award? Because he is a pig trying to exploit the British singer Susan Boyle’s popularity. He’s offering $1 million for Susan to star on his films. Argh.

What a way to destroy people, eh Mark? You so deserve to be hanged. Totally.