Gay Shanghai Guide: Sights, Men, and Pride Parade. Some of the sights you’ll see in the slightly-getting-liberated-but-not-there-yet gay Shanghai scene. The first dude from the right kinda looks like Andy Honda, no? Oh, by the way, the LGBT community celebrated their first Gay Pride (and reportedly the first in China) ever. 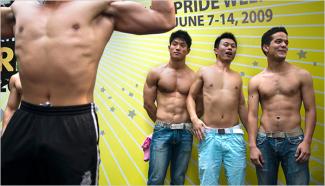 Here’s an email interview, which is a cool gay Shanghai guide, by Malcolm Moore with the Shanghai Gay Pride organizers:

Is this really China’s first Gay Pride?
As far as we understand, what would have been first China’s gay festival happened in Beijing in 2005. However, venues were raided and police shut down the festival. So, yes, we would consider this the first Gay Pride in mainland China.

Why has it not happened before?
A mixture of various reasons I guess. There are always those who feel the time isn’t right. And then there are those who are fearful of what might happen given what happened earlier in Beijing. This time around when we floated the idea to different sectors of the community, we found that people were actually very open to the idea and so we went with it.

How large is Shanghai’s gay population?
Experts estimate the LGBT population to range from anything between 3pc to 10pc of the general population. So if Shanghai has a population of 20 million people, even a most conservative estimate would have us at 600,000. We believe the actual figure is higher than that because we know that there are *A LOT* of LGBT people migrating from the smaller towns and villagers to Shanghai. Shanghai is the gay capital of China.

What is the proportion of locals and foreigners who are turning up to your events?
So far, for our first two nights I’d say about half-and-half. We’ve been very pleased with the turnout so far because we’re drawing people we would not have reached out to otherwise. At both the film screening on our opening night as well as the panel discussion on Tuesday weâ€™ve had standing room only and we noted with interest the presence of several elderly Chinese men.

How easy was it to organize the event and have any city officials contacted you?
It’s been a challenge putting together the event but our volunteers have just been lovely. Most of our problems have just been logistical in nature so I’ll spare you the details.

No we haven’t been contacted by any city officials. Bear in mind many of these events are all events that have been done before. The Fudan professors have been holding panel discussions and gay studies courses for a long while now. The Rainbow League has been organising their sports meets informally. Film screenings. Art shows, etc. You name it, it’s all been done before.Â The only difference I guess, is that we’re getting all these guys to act together and cram all these different activities into one week under the umbrella of Shanghai Pride. Our events are non-political and as far as we understand, we have not run foul of any Chinese law.

Some reports have suggested that Shanghai Pride is still “in the closet”, with no public marches etc. How would you respond to that?
Yes, we have seen that description of Shanghai Pride as still having “one foot firmly in the closet”. That isn’t actually a wrong description of what’s going on. But since public marches aren’t an option here, we’ll just keep doing what we do. I don’t think public marches are the ONLY way to achieve our goals. There are still so many things that can be done that aren’t done yet.

Also, many of our Chinese volunteers and the people that are attending our events are at different stages of their coming out process. Some are out to only friends. Some are out to colleagues. And very FEW are out to family. But these guys are all just happy to be helping out behind the scenes. I think we need to give these people time, and it’s our hope that through events like Shanghai Pride, we help make their coming out a bit easier.

What do you hope to achieve this week?
Shanghai Pride is a community buliding exercise. We hope to raise awareness of issues surrounding homosexuality, increase the visibility of the gay community, help people within our community to COME OUT, build bridges between the gay & straight community (hey we’ve got straight people on the committee and among our volunteers!), build bridges WITHIN the gay community (local-expat bridges), and above all else, to celebrate our diversity!

What is the highlight of the schedule?
Of course, Pride Day, June 13th will be fabulous. There’s going to be a big bash on Saturday with fun and games and drag queens galore. However, our whole line up for the week is impressive. Last night at the panel discussion we had standing room only for a lecture by Fudan and East China Normal University Professors.

What are your hopes for the future?
I think we’d be in a better position to answer this question onlyÂ after Shanghai Pride. Come back to us then.