A gay man in his underwear? Famewatchers, meet Charl Van Den Berg, a 28-year-old restaurateur from South Africa who was recently crowned as Mr. Gay World 2010. Nice squarecut trunks you’ve got there, Charl. And there’s a nice junk in the trunk too. Awesome. 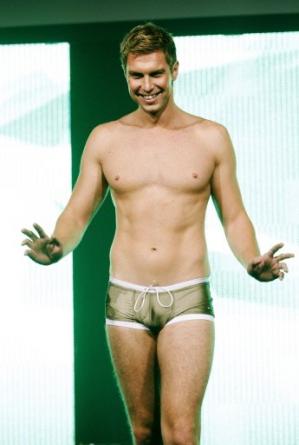 Anyhoo, here’s an AFP report on the male beauty pageant:

Charl Van den Berg, 28, who runs a restaurant in Cape Town, won after four days of competition finished with a walk down a fashion runaway in an Oslo nightclub dressed in skimpy swimwear and various costumes.

The competition is aimed at “finding a leader who can take on the responsibility of being a spokesman for the community and who can also speak out on equality and human rights on the world stage,” a statement said.

Xiaodai Muyi, 26, from China and who took fourth place, competed despite Beijing’s attempts to prevent him doing so.
…
Australia’s Byron Adu, 25, who works for the Australian government, was in second place followed by Rick Dean Twombley, 33, a dancer from Hong Kong while Spanish entrant Sergio Lara, a 26-year-old psychologist, came fifth. 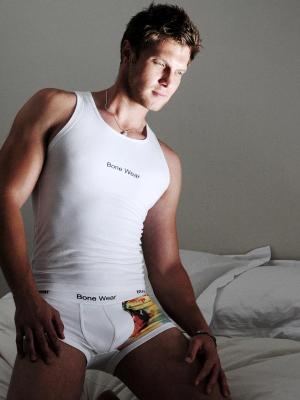 Ever heard of Bonewear underwear? We haven’t heard of it before either but it’s apparently a South African menswear company which produces designer underwear for men. From their website:

Bone Wear is proud to be South Africa’s first and only international underwear label and strives to offer men a unique range of well designed and high quality underwear, gym wear and swim wear made from the best fabrics.

Props to the people behind the label for coming up with an intriguing name. We’re pretty sure you’ll agree that Bonewear is as intriguing as winter Olympian Julia Mancuso’s Kiss My Tiara underwear line.

By the by, the really hot guy modeling Bonewear’s sexy boxer briefs and is no other than Mr. Gay World 2010 Charl Van Den Berg.