Gay Duggar, Anyone? What will be the next scandal that will hit the Duggar family? We here at Famewatcher are going to predict that the next big scandalicious news about this CINO (Christian In Name Only) family will be the future revelation that one (or two) of them is/are gay.

From which are we basing our bold prediction? We’re basing it on 1) statistics and 2) the closeted history of the “Christian” right.

First, let’s look at the statistics. If one in ten (10%) of any given population is a friend of Dorothy, then approximately two of the 21 Duggars (the 19 kids and their parents) could be such a friend. Right? 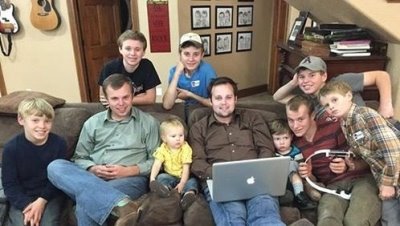 Hah. We wonder what measures they take to hide their natural inclination? Maybe they are — as the guys in the Argentinian advert below — hiding their pink socks, uncrossing their legs, removing their earrings or any kind of jewelry, and un-expressing a brotherly shoulder embrace.

Second, “Christian” conservatives — particularly those who are politically inclined or who use their “Christianity” for financial gain either of which applies to the Duggars — have a well-documented history of being hypocrites who are hiding something in their closets.

Eddie Long, pastor of the New Birth Missionary Baptist Church and a vocal critic of gay rights, was sued by four young men for sexual coercion. The case was settled with Long reportedly paying $15- $25 million.

Roy Ashburn, Republican conservative Catholic elected to the California State Senate, supported anti-gay legislation who later came out as a friend of Dorothy after he was arrested for drunk driving while leaving a Sacramento gay nightclub with an unidentified male passenger.

Bob Allen, conservative “Christian” state Representative for Florida (Republican) and chair of John McCain’s presidential campaign, was busted in 2007 for soliciting s*x for money from a male undercover cop.

Senator Larry Craig (R-Idaho), a member of the Christian Coalition, was arrested in 2007 for lewd conduct in a men’s room stall at the Minneapolis/St. Paul International Airport. According to an undercover police officer, Craig’s behavior — foot tapping and swiping his hand under the stall divider several times — indicated he was seeking a s*x*al encounter. The Senator didn’t contest his arrest and eventually pled guilty (although to a lesser charge of disorderly conduct).

Rep. Mark Foley (R-Florida), a conservative Catholic, resigned in 2006 after news reports alleging that he sent and se*ually suggestive emails and instant messages to teenage boys who had formerly served as congressional pages.

The hypocrisy list is long and it can go on and on so we decided to end the list at #6.

Is There a Gay Duggar? Who Could it Be? As we were saying, we won’t be surprised if any of the Duggars will eventually end up in this list. Who would be the prime candidate? Take your pick: Joshua James aka Josh, John-David, Joseph Garrett, Josiah Matthew, Jedidiah Robert, Jeremiah Robert, Jason Michael, James Andrew, Justin Samuel, Jackson Levi, and the head of the clan himself — James Robert Duggar aka Jim Bob (it ain’t impossible for him to be getting some hotdog on the side, no?).