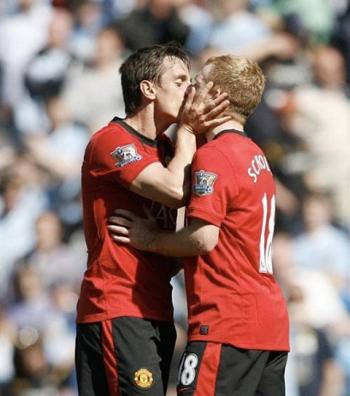 Express.co.uk gives us the details of the kiss: “MANCHESTER UNITED captain Gary Neville plants a smacker on the lips of Paul Scholes after his dramatic late winner kept the title race alive. Paul Scholes was Manchester United and Gary Neville’s time lord – with the only goal of the game at Eastlands arriving just 20 seconds from the end. The win means United are now just one point behind Chelsea, who were beaten by Spurs.”

Gary Neville and Paul Scholes gay kiss from another angle. 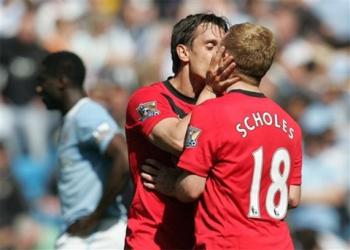 What do you think of this guy on guy kiss? Pick from the choices below.

Update: Six years later, Neville tells us why he planted that smack on his teammate. Give Me Sport reports: “And now, in a talk with the Oxford Union, Neville has explained exactly why he landed a smacker on his teammates’ lips. ‘Against City and Liverpool I couldn’t control my emotions,’ he admitted. ‘If we scored a late winner I did stupid things, like kissing Scholesy!'”

So there you go, he was mainly overcome with emotion which is understandable when you are playing a high pressure game like football.