French Men in Underwear. Some of you Famewatcher googlers are looking for “hot french men in briefs” so we decided to give you what you are looking for. Our Famewatcher motto ain’t “You ask! We give!” for nothing. But don’t ask us for money because we don’t have anything to give. Haha. 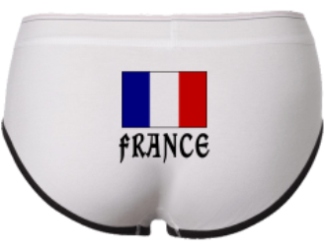 Anyhoo, here are several gorgeous French guys in their underwear. Who of these male models is your favorite? Who would you want to bring home to mama? Before you answer the question, let’s check them out first and let’s begin with Baptiste Giabiconi, one of the highest paid model models of the world according to the New York Times. Born in Marseille, Baptiste is currently the male face of Chanel, Fendi and Karl Lagerfeld. Here’s Batpiste wearing a pair of boxer shorts during a photoshoot for the Evening Standard.

Next up in our group of French male models in underwear is Paris-born Adam Senn. Check him out in his Dolce & Gabbana briefs underwear. 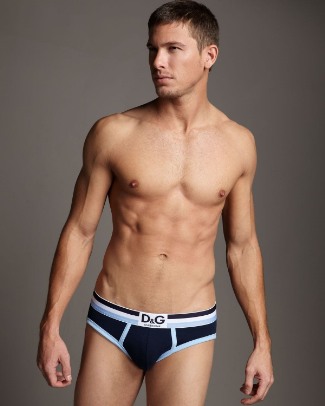 Another pic of Adam, currently ranked by models.com as the 13th Top Male Model Moneymaker, in Simons squarecut underwear. 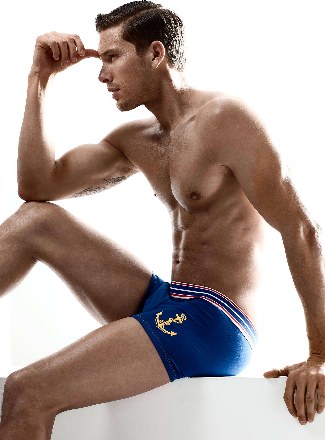 Here’s what models.com says about Adam’s earning prowess and longevity in the modeling biz: “Who knew that this skateboarding teenager, seen here on his models.com MOTW appearance would end up as one of the industry’s most consistent faces. Handsome, funny, charming and smart as a whip, Adam and his longevity is no surprise to those who know him. Aspiring male models take notes!”

Our third French guy in underwear is Adrien Sahores, one of the rising stars of the modeling world who’s reportedly friends with Baptiste. Here’s Adrien at the Alexis Mabille Spring 2012 Parish Fashion Week. 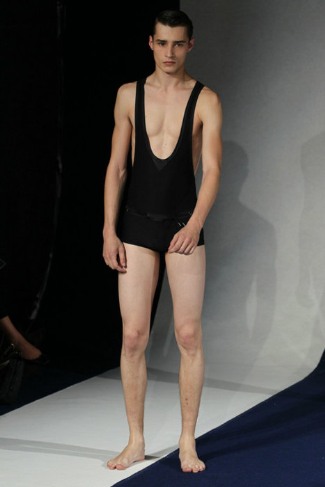 Adrien is ranked by models.com as its #30 Top Male Model. Here’s what they say about him: “Adrien’s mesmerizing visage has entranced us since he first appeared on the scene several seasons ago. The soulful eyes and perfect features highlight a mischievous twinkle that comes out every so often in his pics. Givenchy, Lanvin, Prada and now YSL are some of the premium clients who count themselves fans of his presence.”

Fourth in our list of French men in underwear is Damien Pannier. He’s hawt, isn’t he? 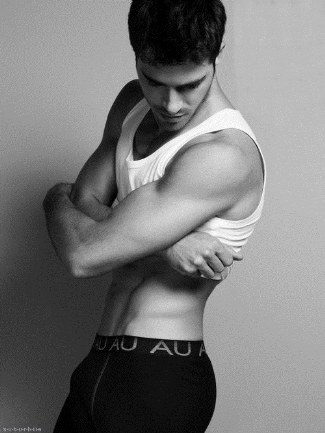 Our fifth French man in underwear is Steven Chevrin. Born in Saint Quentin, France this 20-year-old hottie is fairly new in the biz since he started modeling only in 2012. Despite his “newness”, he’s already done several magazine editorials as well as ad campaigns for Links of London and Armani Exchange. Underwear pic of Steven in Emporio Armani briefs is taken by Daniel Jaems. 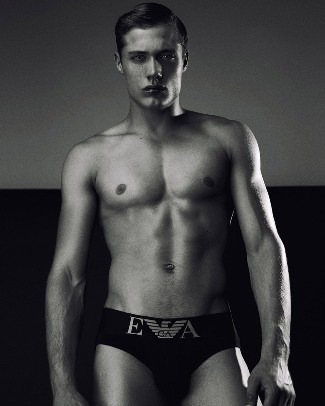 Looking for a French guy wearing a jockstrap underwear? Well, check out Paris jock Clement Chabernaud in this photo for VMan Magazine (we think). This blue-eyed hunk currently sits at #3 in model.com’s list of Top 50 Male Models. He’s outranked only by Simon Nessman at number 2 and Sean O’Pry who heads the heap. 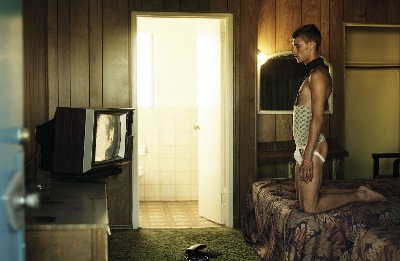 Here’s what models.com says about Clement’s current modeling career: “He was the face of Jil Sander for several seasons which means his epicene features became instantly recognizable in every men’s magazine on the market. With multiple seasons of Jil Sander, followed by Cavalli and Prada, Clement’s distinctive profile makes his mark on the industry.”

We can’t find an underdrawer pic of the gorgeous Nicolas Bemberg so you have to settle with this one. Technically, tank top shirts are underwear right? 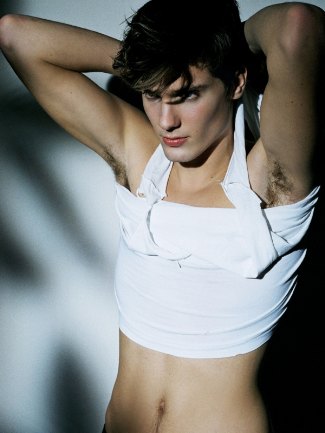 Wearing nothing but a pair of tighty-whitie briefs, the sexy manly hunk that is Aurélien Muller is smoking literally and figuratively. 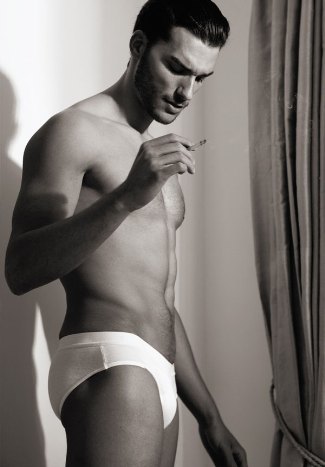 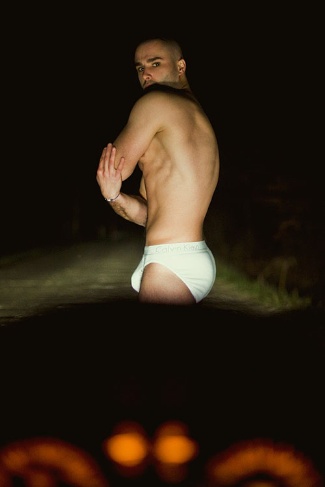 Like Vincent above, Florian Bourdila below also loves him his Calvin Klein underwear. Don’t we all? 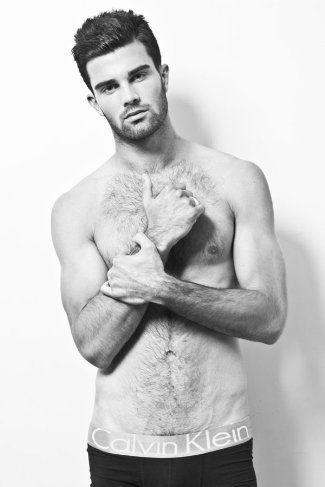 Can you identify the label of the underwear briefs that Mickael di Sinno is wearing below? Pic is courtesy of Julien Cozzolino. 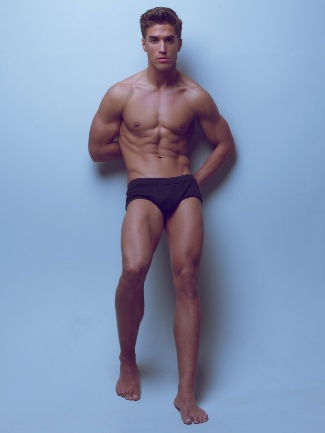 We remember including Xavier Delarue and his Frenchpaks underwear in a post we wrote about basketball players’ underwear, but let’s add him here shall we?

An unnamed male model rocks his red Les Insurges boxers underwear. [Note: If you know this model, please do tell us his name in the comments so we will ID him. Thanks.] 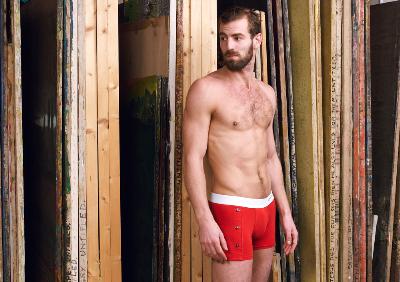 Finally, ever heard of Eminence underwear? Would you know if the brand is still alive and kicking? 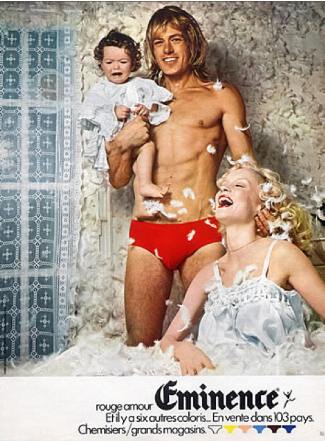 So let’s go back to our question at the beginning of this post: Who of these 15 French men in underwear is your favorite? Who would you bring home to mama and who would you shag on the side?