Fredrik Ljungberg Gay or Straight? Is football icon Fredrik Ljungberg gay or straight? He is straight. And very much married. But you can say that he is a gay ally. In fact, he is probably one of the earliest LGBT ally in the world of sports. He appeared on the covers of gay magazines long before it became “cool” for straight guys to do so.

For instance, here are photos of Fredrik on the covers of Attitude Magazine as well as Out Magazine: 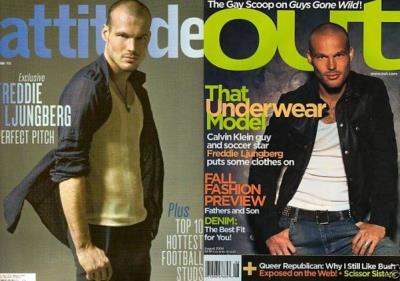 Like other famous guys who are hot, hot, and hot, Fredrik has been the subject of gay rumors. He responded to those rumors not by threatening rumormongers with lawsuits (a-la Tom Cruise) but with grace, appreciation, and humor.

Here’s what our Swedish hunk said about them “Fredrik Ljungberg gay” rumors in an interview with the Evening Standard: “I am not gay. But gay men can be very fashionable, so maybe it’s a compliment.”

If that ain’t a masterclass in public relations, we don’t know what is. He sure knows how to deal with this kind of stuff, no? Check out, for instance, his reaction when he was “molested” by a streaker on the pitch. 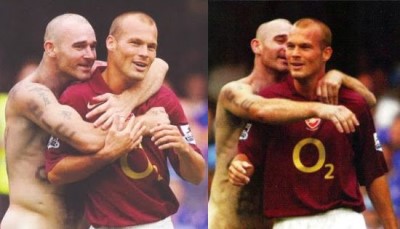 Again, he handled that with grace and some humor. Anyhoo, two years ago in June 2014, our Fredrik tied the knot with long-time partner Natalie Foster. Here’s a photo of the Fredrik Ljungberg/Natalie Foster wedding which was held at the Natural History Museum in London. 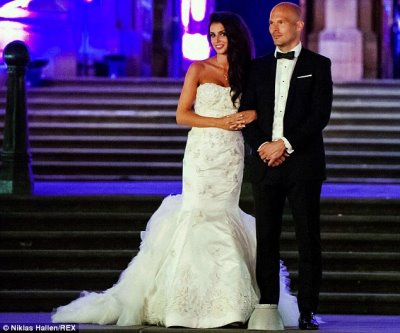 Before we made this update on 26 July 2016, this post is actually about Fredrik’s leather jacket. Haha. But here’s what we wrote back then on 12 September 2009: 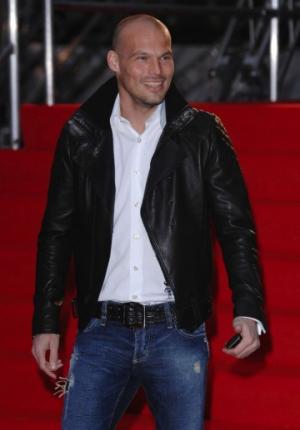 Fredrik Ljungberg is a Hot Man in Leather Jacket: Want more hot men in leather jackets? We bring you Fredrik Ljungberg, the Swedish footballer-turned-model who headlined one of Calvin Klein’s most successful underwear ad campaigns. In 2008, fans voted him as the 11th best player in the history of Arsenal FC.

Aside from modeling for Calvin Klein undies, our hot guy in leather also represented, and in some cases continue to represent, other top consumer brands such as Nike, Procter & Gamble, L’Oreal, Puma, ESPN and Pepsi. Clearly, our Swedish hunk has built a lucrative modeling career which may have made him more money than what he made in football.