Frankie Avalon Young and Shirtless Photos – American Idol Performance . Guess who went to the Idol results show to “serenade” Simon Cowell. It’s 1950s-60s chart topper and sex symbol Frankie Avalon. Simon was surprised but really really pleased when Frankie appeared to sing probably his biggest hit, Venus. Anyways, for those who are kinda clueless about who Frankie is, the information geeks of wikipedia tells us that he is born September 18, 1939 in the good old state of Pennsylvania. He is an actor, singer, sex symbol, and former teen idol.

Oh, did we say he was a sex symbol? Here’s a shirtless photo of Frankie Avalon back when he was a young hottie. 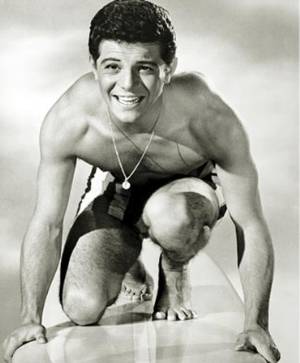 If you are wondering who influenced Simon Cowell’s tight shirt fashion style, wonder no more. He’s obviously copying Frankie. But Frankie rocks his body-fit shirt whereas Simon looks meh when he attempts to look cool by wearing them body-hugging white T-shirts.

Of course, since our focus on this blog is male celebrity underwear or swimwear, we’re not gonna do a post on a 1960s sex symbol without publishing some of his swimwear photos. So here you go, underwear watchers: 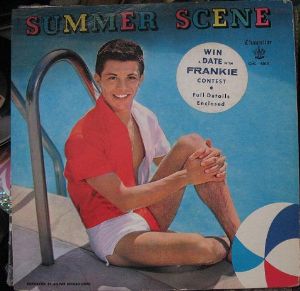 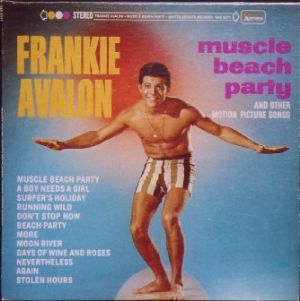 Frankie is sooo rocking his square-cut swimtrunks, no? Apparently, he is one of the original surfing dudes. Take that, Matthew McCosomething!

Here’s another shirtless + swimsuit photo of our teen idol with another handsome young man. 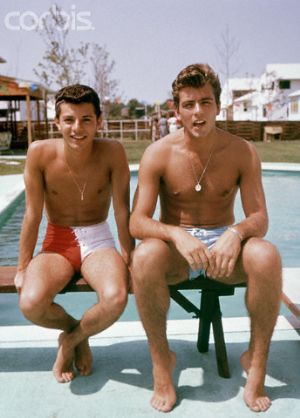 Okay, enough with the vintage photos. Here’s the lyrics of Frankie Avalon’s song, Venus, for those of you who want to sing-along with the 1960s Idol.

Venus, if you will
Please send a little girl for me to thrill
A girl who wants my kisses and my arms
A girl with all the charms of you

Venus, make her fair
A lovely girl with sunlight in her hair
And take the brightest stars up in the skies
And place them in her eyes for me

Venus, goddess of love that you are
Surely the things I ask
Can’t be too great a task

Venus, if you do
I promise that I always will be true
I’ll give her all the love I have to give
As long as we both shall live

Venus, goddess of love that you are
Surely the things I ask
Can’t be too great a task