Fashion: Male Butt Watch. It’s time once again for men to show off their butts according to an article in the NY Times. We don’t know about you but we’ve been showing off our butts, and have been male-butt watching, for a long time. 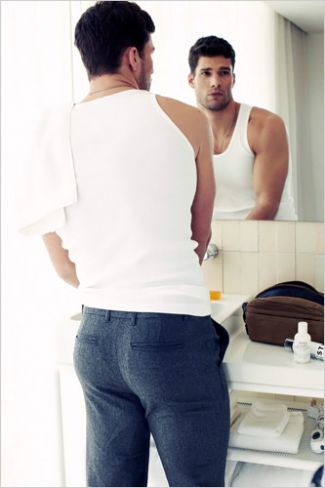 From the NY Times:
IT is one of the driest, slyest ironies of the Peacock Revolution of the last decade. As men have turned themselves out in dandified splendor, they have all but neglected the signature aspect of the peacock’s glory.

That is, the tail.

As we know, much care and money have gone into fitted clothing and fitter bodies. But most has ended up above the waist. This has left modern man with, aside from his jeans, a stack of ill-fitting trousers that leave his backside looking like one of those mysterious blobs that wash up on beaches once a decade to baffle scientists and freak out locals.

“Men have been terrified of wearing pants that are too tight,” said Daniel Peres, the editor of Details, “so we err on the side of big, blowsy pants.”

Similarly, men seeking to improve their bodies by lifting weights have focused on those upper-body parts — pecs, lats, biceps, abs — that create a more powerful view from the front. (A similar ploy, it’s worth noting, is widespread in the animal kingdom, from cobras to gorillas, where it is known as “broadside display.”) Backside display hasn’t gotten a single squat lift. 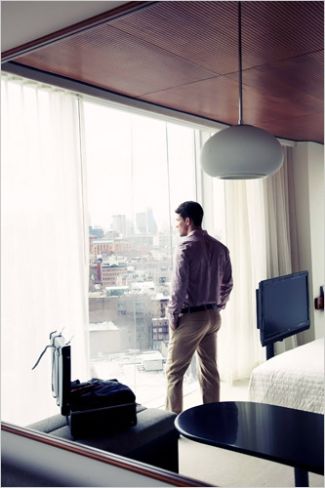 At least, not until now. There are unmistakable signs that men are becoming less reluctant to build up their haunches and wear pants cut to flatter, not flatten, them. Trainers have noticed. So have designers, who are cutting pants that are not fashionista-tight or teenager-baggy, but as Goldilocks would say, had she hit puberty, just right. One new clothing company has been bold enough to make a trimly sexy fit the key to its brand identity.

“It’s been changing in the last few years,” said Steve Feinberg, a personal trainer at Equinox, who no longer has to persuade men to work on their glutes. “It used to be, Who cares what your legs look like? That’s not the case anymore.”

It’s a coin toss to say which came first: more muscular legs or slimmer pants. Designers like Neil Barrett and Michael Bastian have for a few years now won customers with carefully tailored, not-too-tight trousers that flatter a guy’s legs, a cut that a couple of years ago might have been called “European.” Following suit, lines like Banana Republic and J. Crew are no longer cutting the seat of men’s pants with enough material to make an extra pair.

“The old idea of the American fit for pants is shapeless, almost sexless,” said Mr. Barrett, whose specialty is a fit that leaves just enough room for the imagination. “This way, when you’re walking, it’s going to touch parts of your legs, and look flattering, without you feeling all trussed up ready for Thanksgiving.”

Not that it is easy to make pants that fit. One reason droopy-drawer pants lasted so long is that they are easy to make (and with all that fabric, they looked equally bad on everyone). The shoulder and the seat are the most challenging areas to design for, every dart and seam opening a margin for error.

As Mr. Bastian explained, the advanced pattern-cutting of trousers was beyond his own ken: “Luckily, the factory in Italy that I work with makes this cult women’s pants brand, Gunex. I just stood there — I was the fit model — surrounded by a million women with pins, through five fittings, and they applied everything they knew to my pants. It’s an Italian gift, this understanding of the 3-D nature of the body.”

One new company, sold only through a Web site, and advertised simply as “awesome fitting trousers,” has made a better-looking backyard its calling card. Three years ago, Brian Spaly was just another guy at Stanford Graduate School of Business, who in his spare time altered his saggy, baggy pants on his girlfriend’s sewing machine to fit better. (You know, like we all did.) He made and sold a few pair to friends, several of whom came back for more. A school friend, Andy Dunn, saw business potential, and in 2007, the company went online.

Bonobos, based in New York, has found a simple product that sells — that is, casual dress trousers in fabrics like lightweight wool, corduroy and cashmere that cost $110 to $310; and, most important, that fit a man’s legs and seat more like jeans do, courtesy of a novel curved waistband, a medium rise, a narrow-cut thigh and a couple of well-placed darts above each cheek. Last fall, even as the retail sector nosedived, Bonobos sales increased steadily each month, from $163,000 in August to $270,000 in December, Mr. Dunn said, adding that the average customer bought four pairs.

What the new fit does is walk a careful line between comfortable and sexy.

“The intersection of the two is crucial,” said Bill Kang, 27, a marketing executive in New York. “I think it’s a generational thing to some extent. When my father has been with me when I’m getting a jacket or pants fitted, he’ll say, ‘That’s too tight.’ It’s different now.”

Mr. Kang fell so in love with his Bonobos that he made a three-minute fan video for a contest the company sponsored. The video cleverly cut to the chase. A man and woman see each other on the morning subway but don’t get to meet. Just in time, she notices the colorful fabric the company uses to line the back pockets. As the day goes on, she keeps glimpsing that elusive rear-bumper detail through crowds, until she finally meets the man again. The message: The female gaze is something to flirt with, not avoid.

“Women have a license today to ogle men,” said Kate White, the editor of Cosmopolitan, who added that men are increasingly willing to oblige when it comes to wardrobe. “Baby boomers had to pretend clothes didn’t matter. Guys in their 20s aren’t ashamed to admit that they’re thinking about how to turn a woman on.”

Even so, men are in no hurry to revisit the cheesy machismo (and skintight pants) that became a joke in the ’70s. Luckily, today’s shapelier trousers are made in gentlemanly fabrics like corduroy, worsted wool and combed cotton. This not only makes them good for work and off-hours, but also gives them that crucial balance of overtly sexy and coolly dignified.

With pants, as with all things, you never want to look back and cringe.