Patrick Bissell dancing in Don Quixote. Patrick was a leading principal dancer with the American Ballet Theater who died of a drug overdose when he was only 30 years old. Sad, no?

Of course, a list of famous danseurs should include Rudolf Nureyev, probably the best male ballet dancer of all time. Here’s a photo of Rudolf in action. 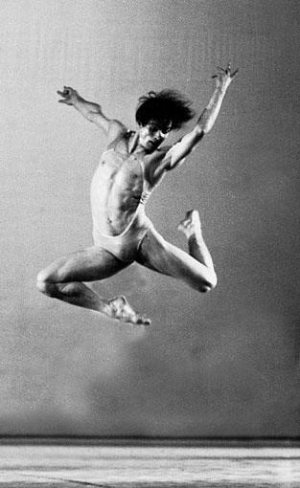 Nureyev is not only a gifted danseur as he’s also gifted down there if you know what we mean. We ain’t gonna upload any photo of his “gift” but you can google for his photo by Richard Avedon. Anyhoo, our Rudolf reportedly had a fling with 1950s Hollywood superstar Tab Hunter who wrote about their relationship in his autobiography, Tab Hunter Confidential: The Making of a Movie Star. Here’s a photo of Tab and Rudolf. They are both gifted down there is all we’re gonna say about these two. 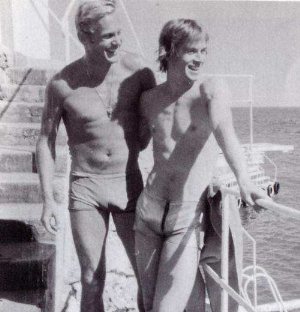 Like Rudolf, Mikhail Baryshnikov is widely considered as one of the greatest ballet dancers of the 20th century. And he’s an Oscar-nominated actor too. According to wikipedia, in 1977 Baryshnikov “received a nomination for the Academy Award for Best Supporting Actor and a Golden Globe nomination for his work as “Yuri Kopeikine” in the film The Turning Point”. Anyone of you watched said movie? 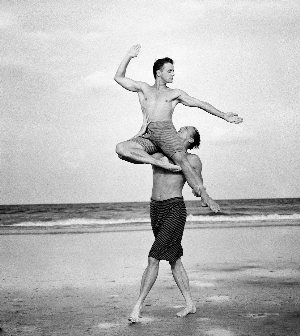 Sascha Radetsky may not be as famous as Rudolf or Mikhail but boy isn’t he cute, hot, and sexy! Yum. Yum. Sascha is currently a soloist for the American Ballet Theater.

We’re pretty sure you’re familiar with Benjamin Millepied because he’s usually in the tabloid mags with his partner Natalie Portman [see a pregnant Natalie in our post on Jeans for Pregnant Women]. 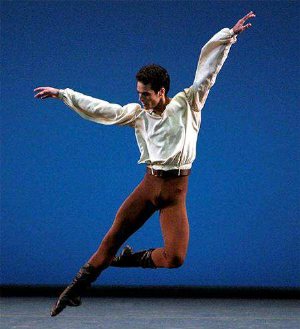 The two met during the filming of the award-winning ballet movie, Black Swan, which Benjamin choreographed and which starred Natalie.

Want more men in Spandex? Go check out our post on wrestler in spandex.

In case you are wondering, this video was reportedly taken at the La Scala Square in Milan, Italy.