Shirtless Ernests Gulbis. Hello, Famewatchers! Looks like we found us a new imaginary boyfriend to replace the fun-lovin’ Dmitry Tursunov. Whatever happened to Dmitry, our Russian hunk who regaled the blogging world with his tennis stories? All seems to be quiet in the Dmitry front. Did he retire? Is he married and out of tennis now? Is he injured? Or is he carousing the night away with Marat Safin?

Dmitry, Dmitry, where art thou? Those of you who miss him might want to revisit this Dmitry Tursunov Underwear post we wrote three years ago. While our Dima is absent, we think its okay to get ourselves a new imaginary boyfriend who is fun, cute, rich, loves to go shirtless, and is straight-talking. Famewatchers, meet the controversial tennis player from Latvia, Mr. Ernests Gulbis.

Didn’t we say he loves to go shirtless? 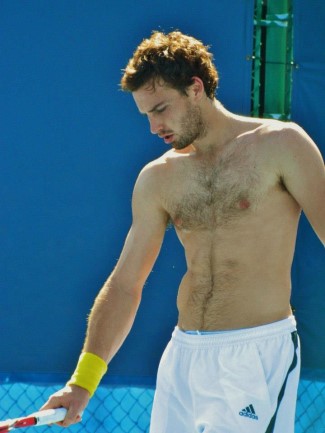 Although we’ve been blogging about tennis players (such as the Shirtless Kei Nishikori), we must admit that we have not paid any attention at all to Ernests. Why you ask? Mainly because we are annoyed by the extra “s” in his name. Seriously, Ernests’ parents, you don’t think one “s” is enough for your son?

Anyhoo, we eventually fell in love with Ernests today when we came across this funny video of him answering questions about vampires (or so he thought). Watch:

How can you not love a man like that? Because we are now intrigued by the guy, we decided to learn more about him and found out that our Ernests is one shit-stirring, straight-talkin’, life-living, quotable quote-making, articulate man. In short, he’s our kind of guy. Here are some of his famous quotes compiled by the folks behind the tumblr blog, Triumphs and Disasters:

On his family’s fortune: “In Italy, when I played well, they asked if I travel here in a private jet. What should I answer them? I answer we have a spaceship, a submarine, you know, a fleet. Let them keep guessing how much money we have. I would suggest people count their own money, never count other people’s money.”

On his night in prison after getting arrested for soliciting a prostitute in Sweden in 2009: “I went out, met a girl, asked her to come to my room, and they came and arrested me. I spent eight hours in prison. There were a couple of problems. One is that I had to piss like crazy and they wouldn’t let me for two hours. The other was, well, I watch these American movies and you get a phone call. They said in Sweden, we don’t have this rule.”

“It was nothing. They have many, many stupid rules, just like in your country [the United States].”

“It was great. It was great fun, a very funny time. But I’m never going to go to Sweden again. If you go out and meet some girls and immediately you’re put in jail, that’s not normal. It was very funny, though. I think everybody should go to jail at least once.”

“It was a fun experience. I think everybody should spend one night in prison. You see a lot of things.”
On hygiene: “I think all the products are for girls. The body lotions, the creams, the makeup, whatever – is just for girls. Guys should be natural. Of course you have to take care of yourself, you have to go to shower, you know, so you don’t smell bad. The rest is just natural. Mr. Gulbis showers and never combs his hair and that’s it.”

On his favorite drink: “I like pure vodka. Shots, with some nice food. Also, one very good drink which I like — you drink a shot of vodka and then you drink milk. The milk is very good for your stomach. After vodka, it calms you down. You don’t get the burning feeling. Try it.”

“Vodka is dangerous. You really need to control yourself not to get a blackout. If you want to go easy, beer. I enjoy beer, but not this piss kind of beer you have in America.”

On his favorite thing about Rotterdam: “I like that the marijuana here is legal. I’m for that. Unfortunately, tennis players cannot do that. We get checked every week. But I like the way of thinking.”

On sex before matches: “For a woman, I believe it can bring some energy. For men, it’s opposite. I don’t think it’s good. … Mentally, of course, you want it. Mentally. But you have to find the balance. What is more important at that time, your physical condition or your mental condition? So then you make a decision. But normally physically you’re tired after that.”

On dating: “Don’t worry about me. I have my own thing. I’ve never dated a girl. I don’t let her believe that she’s my girlfriend.”

On what he looks for in a girl: “Yeah, it’s really long. If I start it would take hours for me, honestly, because I’ve thought about it a lot what I am looking for in a girl. You cannot surprise anyone nowadays with just good looks or just being good in bed. You have to have some kind of fire, some kind of special ‘thing’ to say that I like a girl. You know I meet a lot of girls and I like most of them. I like them because I admire women, and I really think they are the most beautiful thing in the world for us men, but for me to start dating someone I am looking for something, some kind of fire, some kind of unexplainable feeling, which I haven’t found it yet.”

On bad life choices: “I’ve done all the possible wrong things that you can do in a tennis career. But I’m very happy I made the mistakes that I did. That’s important to understand. They were my mistakes, not others’, and I learned from them. The mistakes are simple. After playing a good tournament, you get a week off. You can spend that week the right way, going for a one-hour run each day or going to the gym. Or you can do nothing like I did. You eat and drink whatever you want and not sleep at night. After that one week, maybe at 17 you don’t feel it. At 22 years old, you start to feel it. And you don’t play so well.”

On not being motivated by money: “Because I come from a wealthy family, it’s more normal for me to have this money as a tennis player. It’s OK if it’s there, it’s OK if it’s not there. It’s not a big issue for me. If you come from a poor family, you want to pull yourself up, you have a goal to earn money. I don’t have that goal. The fire in me is that I want to prove to myself that I can do it, that I can be at the top. I don’t care about money, I don’t care about fame. I don’t like money and fame. I don’t need them and I’m not living for them.”

On boring interviews: “I started to watch some of the interviews of tennis players, and I switched them off after one and a half minutes. It was sad. I’m not going to tell which one.”

“I respect Roger, Rafa, Novak [Djokovic] and [Andy] Murray, but for me, all four of them are boring players. Their interviews are boring. Honestly, they are crap. I often go on YouTube to watch the interviews. With tennis, I quickly stop. It is a joke.”

“I think because the top guys made it like this. They started it very nice, very gentlemanlike, and everyone copies them. Young guys coming up, they only see Roger and Rafa interviews, which are always picture perfect. For me, they’re boring. Not as people, but the interviews are boring. Because they give the same answers every time to the same questions every time. I want to see some kind of action, more intense.”

On temper-tantrum-throwing etiquette: “When I get mentally nuts, I try not to affect the other guy. I don’t take too much of a break. Viktor [Troicki] got nuts and it took him, I don’t know, five minutes to calm down, and it’s after a game. I told the referee, ‘Come on. Either he plays or he defaults. Make a decision.’ OK, you can make fun and jokes and a circus, but keep it short. Keep it one joke at a time.”

On fakeness: “Who’s gonna [say], ‘Hey, Ernests, I’m scared of you?’ No, I try to not pay attention to it. It’s tough to have good, nice relationships on the tour. Unfortunately, everybody is a little bit — they congratulate you but with a look in their eye that they don’t mean it. If I congratulate somebody, I mean it. Usually I don’t congratulate people. Honestly. Because if I don’t mean it why open my mouth? I say what I mean, and when I get not that in return, then I’m just — I do my stuff here, I eat, and then I spend as much time as possible outside of the facilities always, in every tournament.”

On if he’s easy to coach: “I think I’m — you know, I don’t want to sound arrogant, but my coach said to me that he’s really happy that he’s coaching me, because there’s not a lot of players with such a potential and such a game as mine. I think I’m not easy to coach, for sure, I’m not, maybe, an easy character. I have maybe sometimes some schizophrenical thoughts in my head. Still, I’m an interesting player to coach, because I can win something big. I think so; my coach thinks so.”

On always speaking his mind: “I’ll prove to you that I’m not so dumb as I look.”

Ernests Gulbis Underwear. For those of you who are UnderwearWatchers, it might interest you do know that, in an interview with onthegotennis.com, he revealed that he likes boxers rather than briefs. To bad we can’t find a photo of him in his boxers. Too bad he comes from a rich family so the chances of him modeling in his undies is nil to none. Hehe.

Gay or Has Girlfriend. Does Ernests have a girlfriend? He stated above that he’s not dated any girl. We are going to assume that that remains true because there are no media reports of him dating anyone at the moment.

Maybe he is gay? Our friends at gayorstraight.com do not think so. Here’s their gay-o-meter score for our Latvian hunk: