Equmen Core Precision Shirt Review. Want to look slim even though you’ve got a beer belly? Ever tried a body slimming compression shirt? Sure, it would be better to get rid of the beer belly instead but not all men can do that for a variety of reasons — slow metabolism, work schedule, outright laziness, etc., etc. 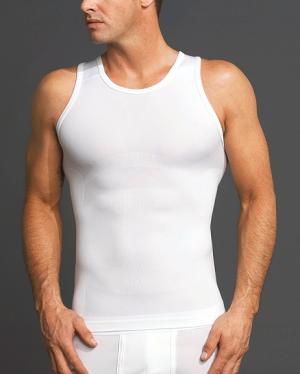 So you might want to check out Equmen’s Core Precision Undershirt which is reportedly designed for the “36-to-50-year-old guy who is starting to maybe slow down a little bit on his physical activity … going to the gym two days a week instead of four or five. He’s got kids and an active family life.”

Does that describe you? If it does, then you should wear Equmen and it will make you look as good as the model above. Really, huh? Oh, not really. The guy actually looks ripped and he must have have been hitting the gym regularly. But you would look better than, say, Michael Moore.

UPDATE: Check out this commercial from Equmen featuring the company’s body slimming shirt for men.

The guys sure look fabulous in their Equmen Core Precision shirts but we agree with our friend Deena who says that these gym toned guys will look fabulous whether or not they’re wearing a slimming shirt. They’re models after all, right? So they are the last kind of men who’d have to wear an Equmen shirt as they’ll look good in anything they wear. It would be more interesting to see the effect of this slimming shirt on ordinary guys with some fatty or beer belly issues.

Equmen Core Precision Shirt Review by Chris Sullivan. Thankfully for us, here’s a broadcast journalist named Chris Sullivan who did try the Equmen slim wear. He’s the kind of dude that the shirt is designed for.

His verdict: It compresses his body but kinda hurts a lot probably like a 17th century corset.

What do viewers think of the result? Here’s what some of them are saying:

So do you agree with the above commenters? We’re not sure it made a lot of difference when he gets covered in that yellow shirt.

Since the product was launched a year ago, the body slimming shirt has gotten a lot of publicity. It’s a marketers’ dream come true. Here’s a report on the Equmen shirt by an Australian television news program:

We are with the doctors when they say that there’s really not a quick fix when it comes to hiding your beer belly. Sure its good to have an instant fix like the Equmen shirt when you’re going for an interview or a date and you want to look good and feel good about yourself but, at the end of the day, it’s still much better to hit the gym or do something physical. Why? Because you’ll be healthier and happier if you’re in better physical shape.