We still have to watch Rocketman, his biographical movie starring Taron Egerton, but apparently Elton’s mom foresaw that her son will be losing his hair. Elton reveals: “In the film my mother said I’d be bald by the time I was 20. I wasn’t bald by 20 but by 30 it was going. And I don’t like being bald, I look like Shrek.”

For those of you wondering what a bald Elton John looked like: 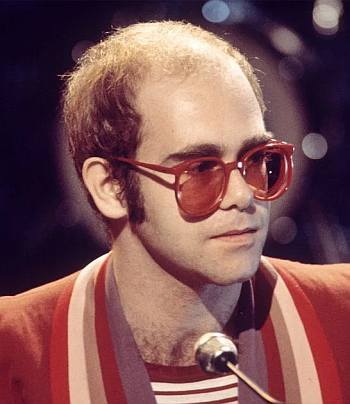 Apparently, his first wigs did not look good on him and his first wigs were disastrous: “First wig I had was so bad, I remember the review when I came out for the Freddie Mercury concert at Wembley said I came out with a dead squirrel on my head. Looking back at it, it did look like a dead squirrel. More like a dead mole. It’s gotten better over the years. I got teased a lot mercilessly in the papers.”

In the really funny interview below, Chris Evans is not exactly teasing Elton about his hair but he was kinda baiting the music icon to share more about his hair secrets. Elton expertly evaded the questions:

Aside from Evans, another celebrity who teased Elton’s hair issues is fellow music superstar Rod Stewart. According to the Daily Express Rod was referring to the Candle in the Wind singer when he talked about his hair in an interview with a Swedish chat show: “Well, I have been fortunate I have still got it, unlike a couple of my mates in the music business. I am not going to mention any names. It’s been sewn. It’s sewn on.” 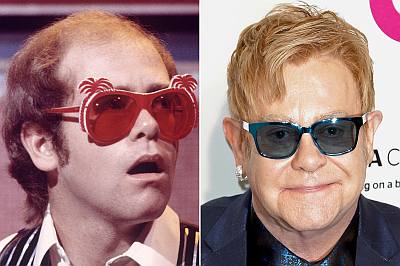 Elton looks dapper in his suit (and his toupee) in this red carpet photo with husband David Furnish during the 2020 Golden Globe Awards. 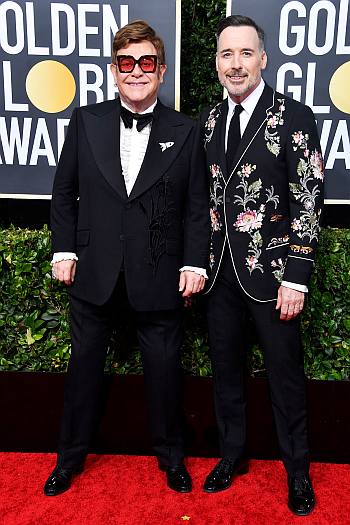