By the by, some of the most iconic scenes in the history of movies involves Dustin Hoffman and his underwear. 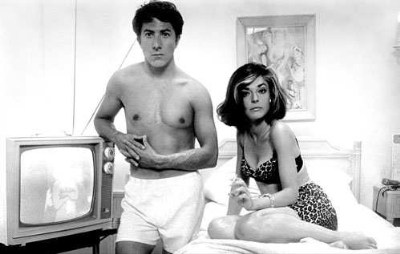 We are talking not only of The Graduate where he strips to his boxer shorts but also of Rain Man where he kinda fights with Tom Cruise about his underwear. As a naughty Film Stage writer puts it, Dustin is “the man who won an Oscar for not wearing any underwear (in Rain Man, of course)”. 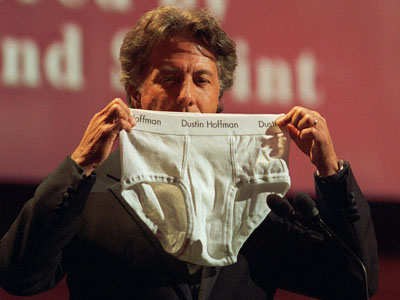 Here’s the much quoted scene involving Dustin and his underwear (or lack thereof). The relevant conversation starts at the 0:37 mark.

Update: Sorry, the video was deleted at source. But here’s the conversation between Dustin Hoffman and Tom Cruise about underwear:
…..
Raymond: Of course I don’t have my underwear. I’m definitely not wearing my underwear.
Charlie: I gave you a fresh pair of mine to wear. Where are they?
Raymond: They’re in the pocket of my jacket. Here.
Charlie: I don’t want them back.
Raymond: These are not boxer shorts. Mine are boxer shorts. These are Hanes 32.
Charlie: Underwear is underwear, Ray.
Raymond: My boxer shorts have my name and it says Raymond.
Charlie: All right, when we pass the store, we’ll pick you up a pair of boxer shorts.
Raymond: I get my boxer shorts at K-Mart in Cincinnati.
Charlie: We’re not going back to Cincinnati, Ray, so don’t even start with that.
Raymond: Gotta get my boxer shorts at K-Mart.
Charlie: [Pulls over, gets out of the car and yells] WHAT DIFFERENCE DOES IT MAKE WHERE YOU BUY UNDERWEAR? WHAT DIFFERENCE DOES IT MAKE? UNDERWEAR IS UNDERWEAR! IT IS UNDERWEAR WHEREVER YOU BUY IT! IN CINCINNATI OR WHEREVER!
Raymond: K-Mart!
Charlie: You know what I think, Ray? I think this autism is a bunch of shit! Because you can’t tell me that you’re not in there somewhere!
Raymond: Boxer shorts. K-Mart!
…..

Question: What are your idiosyncrasies when it comes to underwear? Does it have to be a particular style of a particular brand bought from a particular store in a particular city? Raymond sure loves him his Cincinnati K Mart boxer shorts, doesn’t he?