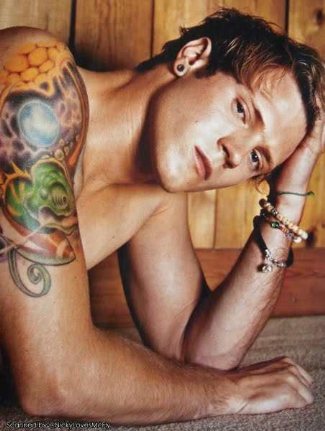 And why not? He’s got nice tattoos (although grandma Akita doesn’t like them), he sometimes strips to his boxers underwear when performing on stage, and he’s got a great sense of humor. Oh, he won I’m a Celebrity … Get Me Out of Here too. That’s worth a point, right? 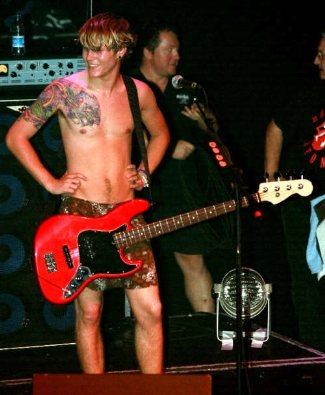 Lots of internetizens are wondering about who among the McFlyers is gay. Some are picking Dougie as the most likely friend of Dorothy. But some are also saying that the whole gang is into dudes. In an interview with The Mirror, our Dougie reveals that he “gets the dudes”. We’re not surprised by that. For he seems to like making out with guys. Hehe. For those of you wondering, the other dude is Mark Wright, Dougie’s co-contestant and runner-up on I’m a Celebrity. Want some Mark Wright Underwear Photos? 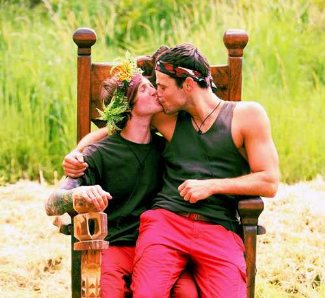 These two should be the poster boys of furries … if you don’t know what furries are go find the definition on Urban Dictionary. 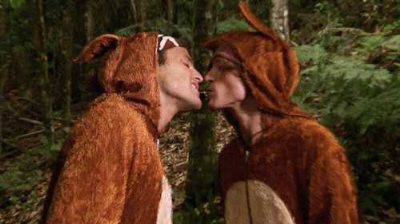 Anyhoo Dougie’s sense of humor, which we cited as one of the reasons why we like him, shines through in this interview (from the Mirror):

So, how does it feel to be a s*x god?
I don’t know where the hell you’ve heard that, but it’s definitely not true. It’s very flattering, but I think your sources are incorrect.

What’s going on under those baggy T-shirts? Buffness?
No not really, just a lot of hair. Which I shave a lot. I’ve got a tattoo that has a lot of attention to detail, so if I have too much hair on there it gets in the way and makes it look all weird. It’s Neil Armstrong in a moon-buggy fighting off an alien that’s trying to kill him.

Do you work out?
I smother myself in KY jelly. And then I do a few sit-ups.

So are you vain, what with the chest shaving?
No, I spend a lot of time looking in the mirror, but it’s to squeeze spots. I don’t have acne, but there are quite a few blackheads going on.

Filthiest fan mail?
It was a thong that had ‘Turn your *r*ction in my direction’ written on it… We all get equal amounts of fan mail. Harry gets the older women – I think that’s because of his hairy face – Tom gets the geeky guys, Danny gets the chicks and I get the dudes. It’s awesome.

Any sordid tales of groupies for us?
There’s never been anyone in my bed waiting when I walk in to my hotel room, unfortunately. And there are none on the tour bus. It’s all a bit wholesome, just us playing video games. Sorry about that.

What’s the strangest or most daring place you’ve ever had s*x?
Erm. Erm. Erm. I’ve never had s*x, what are you talking about? We’re like the Jonas Brothers in McFly. We all wear those purity rings. And p*n*s rings. 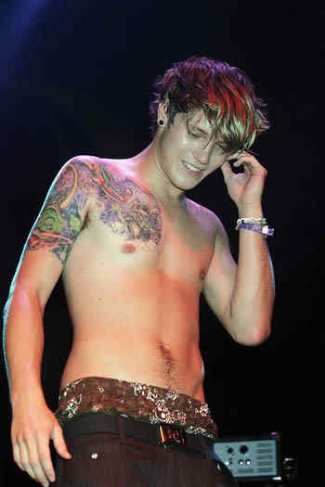 Liar. Come on, tell us!
I can’t. But only because I don’t have a good enough answer.

Speedos or shorts?
Neither. I wear a male thong on the beach. No white bum for me, hell no, just a white crack…

What does your girlfriend (Frankie from The Saturdays) think is the s*x**st thing about you?
She thinks I look funny n*k*d. I think that’s probably a good thing, you know – I’m providing humour in the bedroom. If you saw me naked you’d probably laugh as well. I don’t have an a*se. There’s just my back and then my legs really, which is kind of weird, and then there’s my massive stupid tattoo. And a small c*ck.

Really, how small?
I’ve never measured it, I’m too scared to face the truth.