Devon Sawa Underwear and Shirtless Photos: Now and Then. Thank heavens for Nikita. It brought us back the 1990s teen matinee idol that is Devon Sawa. We thought he’s gone the way of other teen stars who faded and disappeared from the biz when they got older but our Canadian cutie is back. 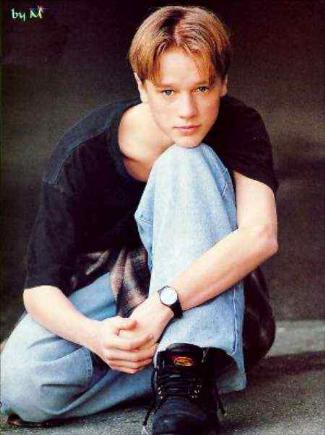 Old fans are rediscovering him. New fans are discovering him. And some of the old and new fans are shipping him with his Nikita co-star Shane West and calling the pair SheVon. [Our friend Deena wonders why they don’t call the imagined couple Devane?] 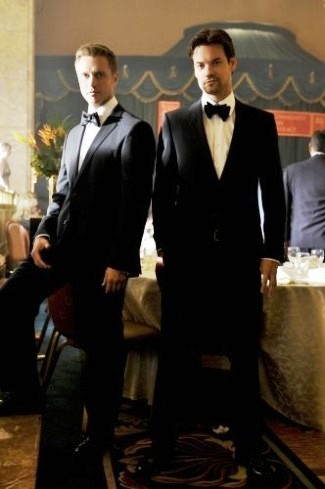 They do look good together, don’t they? They remind us of those gay wedding photos we’ve been seeing in the news lately.

Is Maggie Q their “groomsmaid”. There should be a groomsmaid in weddings, don’t you think? There’s a bridesmaid. There’s a best man. Why don’t we combine the two and call them either “best lady” or “groomsmaid”? 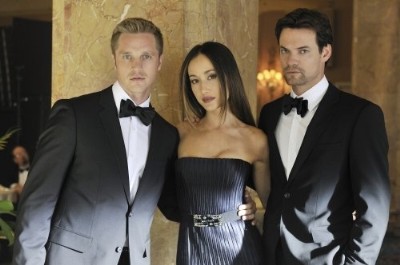 Anyhoo, let’s go back to Deena’s 1990s crush Devon Sawa. He lost his teen cuteness but he’s gained some muscles which muscle worshipers will appreciate. 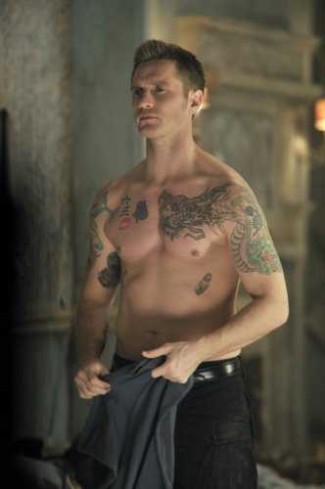 Does he remind you of our other celebrity crush, Jeremy Renner? Both of them seem to be the kind of guy who is silent but who get things done, no? Or, to use Deena’s words, “taciturn but deadly”. 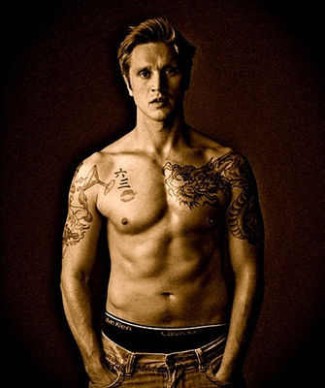 Whoever updates the profiles of celebrities on IMDB should update Devon’s profile because it currently states that he’s got two tattoos only (a cartoon devil on one arm and a cross on the other arm). As you can see in the preceding photos, he’s got several other tattoos now.

Here’s a shirtless pic of Devon when he was younger and tattoo-free. 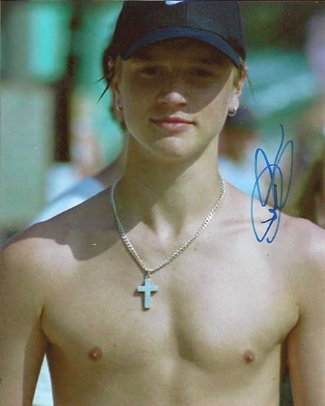 Now, look who’s tied in bed with nothing but his underwear? Kinky. Whoever is casting the Fifty Shades of Grey movie should include him in their cast. 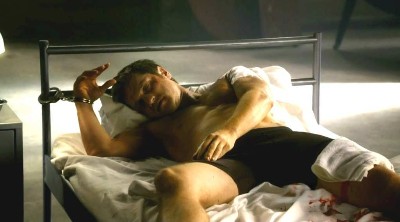 Oh wait, the guy is hurt and bleeding. 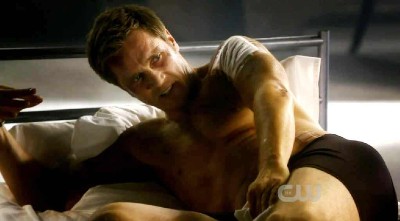 There’s a special place in hell for whoever hurt our Devon. Right, Famewatchers? 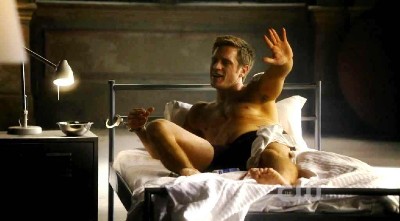 Time to ask our usual silly Famewatcher question: Is Devon Sawa gay? The visitors of gay-or-straight.com voted him “73% gay” which supposedly means that he is “highly gay” but Deena thinks otherwise. She also thinks, and we agree with her, that people voting on the gayness of celebrities is stupid and silly.

Anyhoo, in a September 2011 interview with Perez Hilton, Devon reveals that he is engaged to a non-showbiz girlfriend. Check it out:
…..
Perez: Did you date actresses that we might know?
Devon Sawa: I dated a few but you know.
Perez: Nothing long term?
Devon Sawa: Nothing long term. I actually –
Perez: There was no Britney to your Justin?
Devon Sawa: No, I was, I dated a few Canadian girls. I liked girls outside of the business, a lot. You know there was a few but you know.
Perez: And what about now? You dating now? You married?
Devon Sawa: I’m engaged.
Perez: Engaged?
Devon Sawa: To a girl from Canada, and she’s not in the business, thank god, and you know that way we got stuff to talk about and –
Perez: Does she — do you live together?
Devon Sawa: Yeah.
Perez: So is she with you in Toronto when you film?
Devon Sawa: No, she’s doing her own thing. She’s got her own job.
Perez: She’s got a normal job?
Devon Sawa: She’s got a normal job, and that’s, we both like it that way.
…..
So there. That’s settled. Devon is not gay despite his love for V-Neck shirts. Hehe. And he has a girlfriend in Toronto (at least in 2011 we can’t say if that’s still true now).