Is There a Dennis Hastert Gay Secret? It’s another day and there’s another Republican scandal. And this one may yet push those stupid Duggars off the headlines because it involves a former Speaker of the U.S. House of Representatives which is, if we know our American politics, is the third most powerful post in the U.S. government.

Anyhoo, the guy we are referring to is former House Speaker Dennis Hastert who was indicted by a grand jury yesterday. Let’s have NPR host Robert Siegel and David Schaper tell us more:

ROBERT SIEGEL, HOST: A bombshell of an indictment was announced late today by the U.S. attorney in Chicago. Former House Speaker Dennis Hastert is charged with bank fraud. Hastert is the longest serving Republican House speaker in history, holding the post after Newt Gingrich stepped down in 1999. Hastert represented an Illinois congressional district west of Chicago for two decades, and joining us now from Chicago with more on this story is NPR’s David Schaper. And, David, first of all, explain the indictment. Tell us more about the charges.

DAVID SCHAPER, BYLINE: Well, the U.S. attorney in Chicago charges J. Dennis Hastert with improperly structuring cash withdrawals from bank accounts to evade federal reporting requirements and then lying about that to the FBI. He allegedly withdrew a total of approximately $1.7 million from various bank accounts between 2010 until last year. And he allegedly paid that money to someone who was referred to in the indictment as individual A. One thing we do want to make clear though is that these charges are not related to anything he did or may have done in office.

SIEGEL: Well, what do we know about individual A, if anything?

So what’s Hastert’s secret? Maybe he stole a lot of money from the government or maybe he got lots of money from lobbyists for him to do their bidding? Maybe he shared some national security secrets to enemies of the United States? Or could it be the gay rumors about him found on the internets as far back as 2006. Like this one from rense.com:

The rumors about another top GOP member of the House being involved in s*x**l encounters with young “men for hire” are confirmed to WMR by well-placed sources in Washington’s gay community. The member in question is House Speaker Dennis Hastert, whose “alternate” life style is the primary reason for him and his staff covering up the scandal involving ex-Florida GOP Rep. Mark Foley and his lewd messages sent to underage male congressional pages.

What do you think, Famewatchers? We won’t be surprised if it turns out that the above rumor turns out to be true and that a Dennis Hastert gay secret is about to unearthed from the closet. He ain’t the first conservative Republican who turned out to be a hypocrite and he certainly won’t be the last.

Does his secret involve a high school student from his days as a wrestling coach? 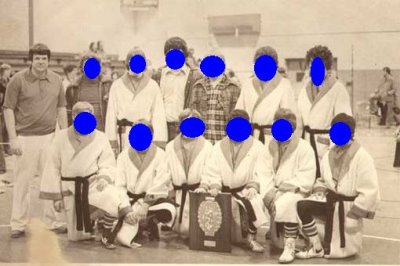 Let’s end this post with this pic of Hastert and Dubya who also had his own Jeff Ganon rumors to deal with. 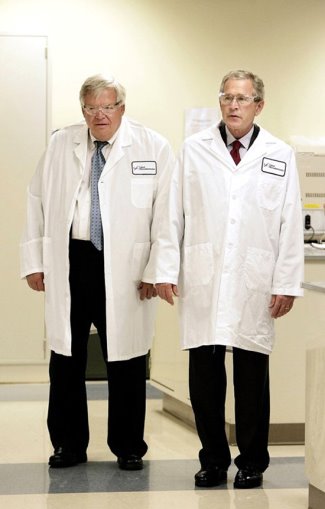