David Holmes Harry Potter Stunt Double Injured in Shooting Accident. OMG. This is terrible news. A stunt double for Daniel Radcliffe in the Harry Potter movies was injured when an explosion occurred at the set of the popular movie franchise’s last installment, Harry Potter and the Deathly Hallows.

The Mirror quotes a source who talked about the accident: “The stunt double was badly hurt. He was rehearsing a flying scene which involved an explosion and it seems to have gone badly wrong. The guy was rigged up to a harness for the scene and was flying through the air. It is thought he may have been caught by the explosion and hit the ground very hard.

“He told crew members who went to help him he couldn’t feel anything from the waist down. Everyone is just hoping he makes a good recovery. It has come as a terrible shock.”

Meanwhile, the studio confirmed the accident with this statement: “We can confirm a member of the Harry Potter production was injured in an accident. We are awaiting further news.”

The Telegraph quotes a friend of Holmes on the extent of the actor’s injury:

“They are hoping he will make a full recovery. But it was a nasty injury and it might be some time before they know exactly what they are dealing with. He is hoping he hasn’t suffered any really permanent damage. He has worked in the film industry long enough to know it can be dangerous. And no matter what precautions are taken, performing stunts always carries a risk. But he has always loved his work and he will be hoping this isn’t the end of his career.”

Radcliffe, 19, was not on set at the time as he is performing in Broadway for the play, Equus, but The Telegraph reports that he has previously praised David’s work, saying: “He’s a great gymnast. He’s been teaching me gymnastics and it’s so much fun.” 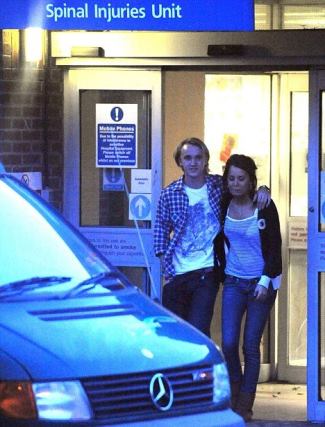 Harry Potter stars Daniel Radcliffe and Tom Felton (with his girlfriend) visited stunt double David Holmes who was injured in an accident during a shooting of the Deathly Hallows. 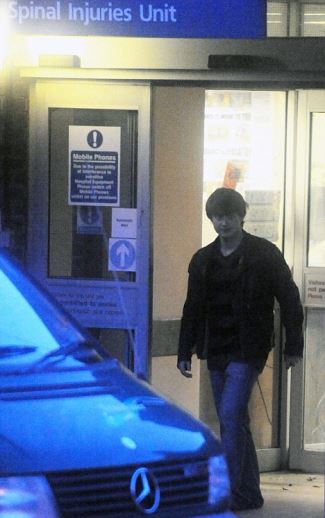 Wondering what David looks like? That’s him on the left taken on the set of the Goblet of Fire. We really hope that he will recover from his injuries. 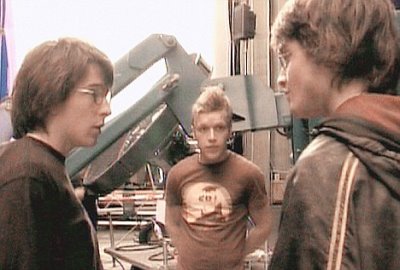