Before we go on gossiping about this report, let’s remember that it is from the Daily Mail. It is in the Daily Mail’s nature to “scandalize” reports which are not at all scandalous.

Anyhoo, the Daily Mail also states that the house that David allegedly bought for Danny is a two-bedroom flat located in South London and costs £330,000.

Here’s a pic of an Elton-less David vacationing with Danny and a gorgeous dude. 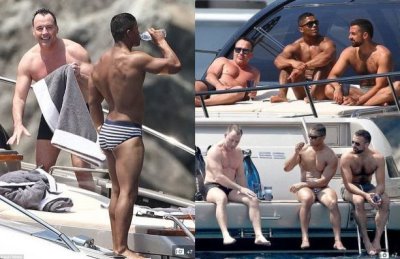 More from the Daily Mail:

The report alleges that David and Danny, a personal trainer in a London gym, met during a night out, when Elton was not present and continued to party together.

Furnish and Danny were close and went out a lot on the gay scene. Elton would not be there as he does not like clubbing and was often away touring and working,’ claims a source.

The friends were seen out together for around 18 months, with photos from June 2012 showing the pair aboard a yacht in Portofino, Italy with other friends, before they headed to the Greek island of Mykonos while Sir Elton was on his Greatest Hits tour.

When asked to comment, Danny reportedly had this to say:

We were just friends, that’s all we ever was. I’m friends with both (Sir Elton and Furnish).

This was corroborated by a source interviewed by the Mail who had this to say about the report:

Danny is a friend of Elton’s as well and Elton doesn’t have a problem. There is absolutely not a crack in Elton and David’s relationship.

The same source stated that Danny is actually paying rent for the flat he is living in.

So there. Unless we see photos of David and Danny making out or something like that, we don’t think there’s any story here after all. The Daily Mail is just being the Daily Mail and we are being sucked by its salacious reports. We, admittedly, are no better for regurgitating crap. Guilty, Your Honors! We can’t help it, it’s also in our nature. Hehe.