David Beckham Bentley Bentayga: Celebrity Cars Update. We are updating this post to add a not so fun fact about David and his Bentley. In May this year, the football icon was given a six-month driving ban for using his phone while driving his Bentley Bentayga. He was also ordered to pay a fine of £750 and was given six points on his driving license. Not cool, David, not cool! 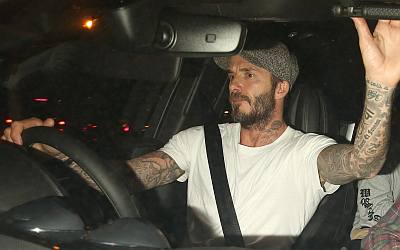 This isn’t the first time Beckham and his Bentley ran afoul of traffic laws. In August 2018, he was charged with overspeeding specifically, driving at 59mph on the A40 at Paddington in west London which is a 40mph zone. He escaped prosecution on a technicality as his lawyer argued that the football star’s speeding notice arrived one day late.

Here’s a photo of Beckham we grabbed from the Daily Mail which shows the global icon inside a Starbucks coffee shop while his Bentley Bentayga is parked nearby. Here’s a glimpse of the David Beckham Bentley Bentayga. 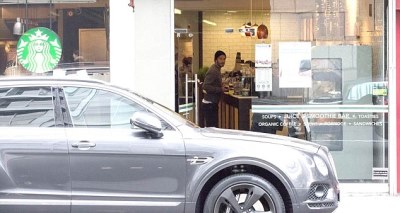 Beckham must have an advertising contract with Bentley because here he is in an ad campaign featuring a Bentley and a very prominently displayed Breitling watch. Very nice image, huh? Reminds us of that James Bond movie Skyfall where M dies in Scotland. Hehe. We know that’s not what the good people behind this advert were going for but we can’t help what this image evokes in our mind. 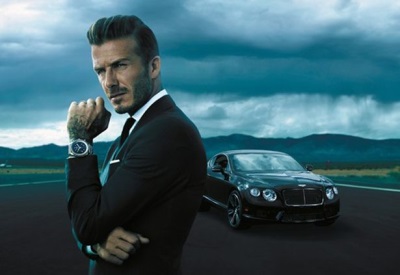 Anyhoo, as we were saying, both The Queen and Beckham are members of the Bentley Bentayga Owners Club. Of course, there’s no formal club with that name — if there is we are not aware of it — all we are saying is that they both own the same kind of car.

Apparently, the first delivery of a Bentley Bentayga is to The Queen’s address. From Auto Evolution:

The first man – or rather woman – to receive a 2017 Bentley Bentayga is none other than Elizabeth the Second, who rules over England and the whole Commonwealth in her spare time. We shouldn’t be too surprised, as the Queen is known to be a bit of a petrolhead, and above that, the current official Royal Limousine is also a Bentley. The explanation given by Michael Winkler is that she owns a big estate in Scotland, and she will use the Bentayga for her hunting expeditions on the property (we did say it was big).

How much do you have to pay to own a Bentley Bentayga? If you are in Aussieland, you gotta have Aus$420,600 according to caradvice.com.au. In the UK, you got to have £160,000 according to the Daily Mail story from which we grabbed Beckham’s photo above. In the United States, the starting price of a Bentayga is US$229,000 according to Jalopnik.

That’s it for now CarWatchers. What do you think of the David Beckham Bentley Bentayga?