Darren Criss Speedo – Andrew Cunanan in Versace Movie. Today in Actors in Speedos, we bring you our imaginary Glee boyfriend Darren Criss as he takes a shower in his red itty bitty Speedo. 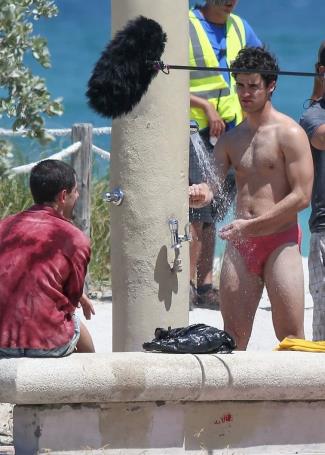 Darren is playing the role of Andrew Cunanan in the TV series, The Assassination of Gianni Versace: American Crime Story.

More about Darren’s casting as Andrew Cunanan from the Hollywood Reporter: “The casting brings Criss back into the Murphy fold following a brief gig on American Horror Story and his breakout role as Blaine on Fox’s megahit Glee. Most recently, he has a role in The CW’s Supergirl/Flash musical crossover. Versace marks Criss’ first series regular TV gig following Glee. He also was poised to star in a workplace comedy that was in development at Fox.”

Wow. It’s nice to know that our Darren is busy as a bee after his gig as Blaine. Let’s keep our fingers crossed that his workplace comedy will work out. We look forward to it more than the Versace series. 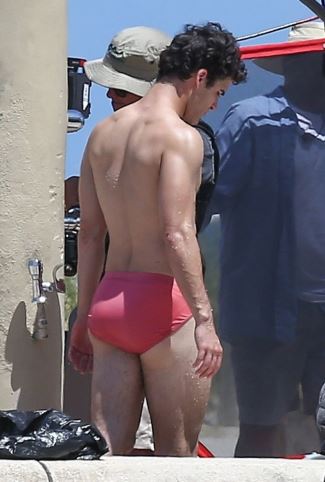 And who is this Andrew Cunanan guy that Darren will be playing? Well, he is a hustler who — in the words of wikipedia — “befriended wealthy older men and spent their money (or credit cards) to impress acquaintances”. Here’s a black and white photo of the guy. 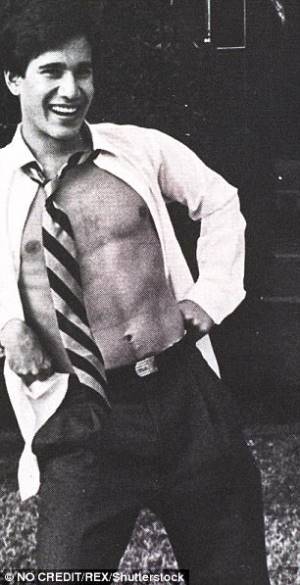 He’s actually kind of hot, no? However, the guy is also a spree killer and one of his victims is designer Gianni Versace. At the time of the Versace murder, the authorities were not able to establish Cunanan’s motive for killing the designer. Let’s hope that the TV show will shed light on the Cunanan-Versace connection. Were the two lovers? Was Versace a Cunanan client? Did Andrew seek out the victim? Or was the designer simply in the wrong place at the wrong time and fell victim to a man intent to do something bad? Questions! Questions! And we hope we get answers!