Danyl Johnson Boyfriend: Who is He? Danyl Johnson, the leading contender in Simon Cowell’s X-Factor ITV show, has admitted that he is bisexual — see Is Danyl Johnson Gay. Now, he’s been photographed happily holding hands with a man who just might be his boyfriend. Good for you Danyl. What about introducing him to the rest of us? 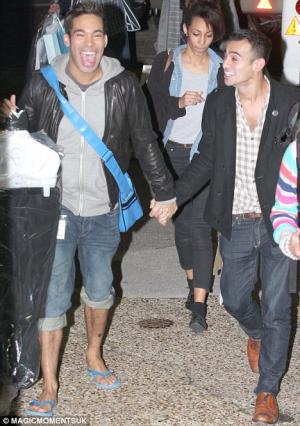 Anyhoo, Famewatchers, any one of you getting the feeling that Danyl is fast becoming the Adam Lambert of this year’s X-Factor? Like Adam, Danyl enjoys a lot of buzz on and off line. He also appears to be the most talented of his group of contestants. But like Adam, he might end up not winning the competition but will nonetheless have a career ahead of him in the entertainment industry.

Update: Does Danyl Johnson have a girlfriend. After he revealed that he is a bisexual man, some of you wondered whether the X-Factor finalist ever had a girlfriend.

Well, the Mirror gives us the answer as it is reporting that a certain girl named Katie Swales is claiming that she and Danyl were in a relationship for six months. She denies that she’s the one who turned him gay:

“Even now, it’s a joke between friends that I turned Danyl gay. But at the time I had no idea he had any doubts about his ­sexuality. All I can remember is how upset I was when he rang me and said our relationship was over. I was absolutely gutted. I ­really loved him and I thought he felt the same way.”

She claims that she’s the only one who’ve been his girlfriend. He thinks he is gay and is baffled when he claimed that he’s bisexual.

“As far as I know I was his only girlfriend and I had always believed he was gay. I can only think he was told to say that so he would get both the gay and the straight vote.”

So what do you think Famewatchers, is Danyl Johnson really bisexual or is he gay?