Daniel Radcliffe Ig Perrish Leather Jacket in Horns Movie. Forget about Daniel Radcliffe’s horns, we are more interested in that leather jacket he is wearing. It looks badass and cool and current. Where does one buy something like this? It must be costume-made for the movie because we can’t find them on the site of the usual suspects like, you know, Hugo Boss which made Bruce Willis’ Looper leather jacket which us Famewatchers love, love, and love. Or Ermenegildo Zegna who made Tom Hardy’s Bane Leather Jacket. Dan’s leather does not appear to be a Belstaff either. 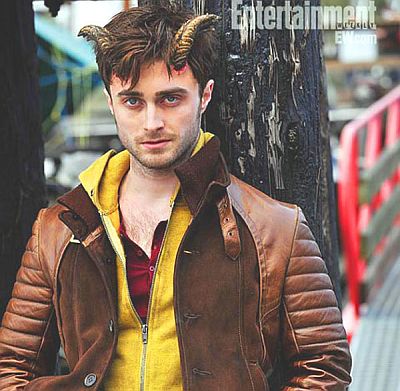 Maybe Dan is laughing because he knows that his leather jacket is one of a kind. Too bad because we really, really want to have something like that for our boyfriend. Maybe we’d buy a replica?

Any of you Famewatchers planning to watch this Horn movie? We know that Kevin will because he loves him his Daniel Radcliffe and would go watch everything he stars in. Even that boring December Boys. Yours truly will also watch it not because we are Radcliffe superfans but because we love us some fantasy/horror/mystery movies which is what this movie is supposed to be about.

What does Daniel say of the movie and his role in it? Here’s what he told the media during interviews:

On his role: It’s a very, very different type of part than anything I’ve done before. It’s deeply emotional and also incredibly outrageous in some ways. To play somebody who, in the midst of a time in his life of great turmoil anyway, undergoes this horrific transformation into a devil character – it was very, very exciting. [via Entertainment Weekly] 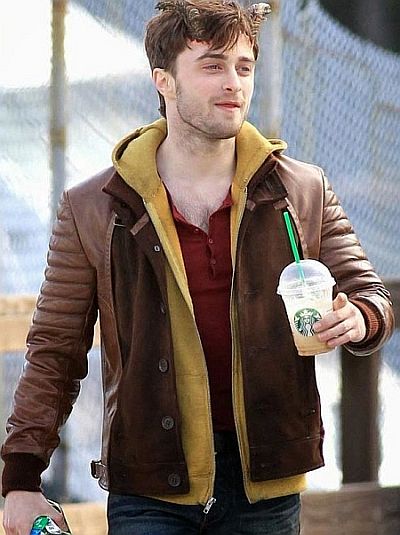 On what attracted him to the script: It’s a metamorphosis story, but the thing that excited me was that tonally it wasn’t like anything I had read. It was both incredibly dark – like really dark and violent, and full of classic horror stuff – but also it has a very dry sense of humour. [via The Province]

On his horns: The nature of the horns means that any time I meet somebody, they end up telling me their deepest, darkest revelations. So even a small scene like this becomes incredibly intense.