However, when our Daniel opts for a shorter haircut, his receding hairline becomes very noticeable as you can see in the images below: 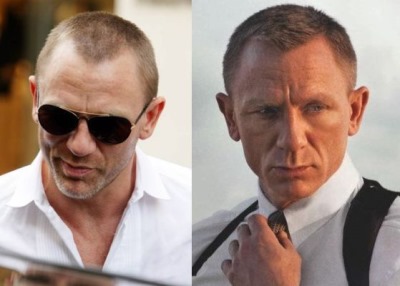 That’s a pretty prominent “M” pattern. Surely he’s not purposely “carving” the letter to honor his boss or the fictional head of MI6 in the James Bond universe, no? [Want more celebrity hair transplants?]

Anyhoo, here are some “hair photos” of Daniel taken when he was younger and when his hair was fuller:

Given his current hair condition, does the blond James Bond need a hair transplant? Or can he rock the bald look?

Well, we here at Famewatcher believe that, unlike the “unfortunate” Matt Damon who loses his appeal when he is a baldie, Daniel Craig is actually one of those guys who can look good without hair. Compare and contrast: 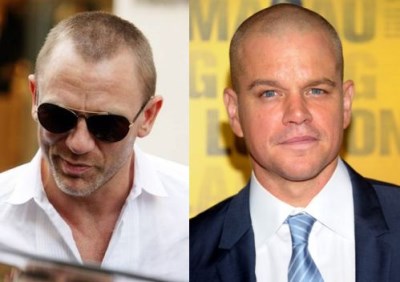 You agree with us, right? One who does not agree with us that Daniel will still look sexy when he’s a baldie is hair transplant surgeon Dr Asim Shahmalak. He was quoted a few years ago saying this about the actor’s receding hair issue:

Like Sean Connery before him, Daniel Craig’s Bond is receding slightly around his temples. It’s obviously a very physical role, and Craig bulks up considerably to play Bond.

It’s possible dramatic changes in diet, exercise and his body’s muscle mass will have a knock-on effect on his testosterone levels, and thus his hair.

But Roger Moore, Pierce Brosnan and Timothy Dalton were also all slightly receding on the temples when they played James Bond, so maybe it’s something the producers look for?

I’m sure Daniel Craig doesn’t want to lose all his hair like Connery, so he should seek professional advice. I think he would benefit from 1,500 to 2,000 individual follicle grafts from the back of his head where his hair is still thick and resilient. That would bulk out his temples nicely.

Maybe the good hair doctor is right? What do you think? We respect the opinion of professionals in matters like this but we discount it a little bit when their opinion is beneficial for their profession. Hehehe.

Past Daniel Craig Hair Transplant? Anyhoo, we’ll end this post by noting that Daniel may have undergone a hair transplant in the past — if the Sunday Express (express.co.uk) knows what it is talking about. Here’s what it says in a 2011 news article:

Sir Sean Connery, who began losing his hair when he was 21, opted for a wig but Daniel Craig is another who is reported to have had a transplant.

Eh, its just reporting on a “report” which may be factual but is most likely a rumor. What do you think? Was there a Daniel Craig hair transplant procedure in the past? Does he need one as stated by Dr. Asim? Or will he still look sexy and hot when he is bald? Share your thoughts in the comment section.