Cristiano Ronaldo Gay Proof. We are updating this post because, apparently, the Great Rihanna has confirmed that the Great Portuguese Footballer is not only a friend of hers but also a friend of Dorothy.

If Rihanna says so, who are we to doubt her, no? Her word is good enough proof for us that our Cristiano is into dudes. However, since he also appears to also love him his gorgeous female models, we are gonna say that he is at least bi.

But what did Rihanna say exactly? Did she mention the fabulous “G” word? You bet she did. But it ain’t really categorical. We gotta know the context and here’s what happened according to nownextnow.com:

While being interviewed by the press on her European tour, Rihanna was asked about her relationship with soccer star Cristiano Ronaldo. Her response?

“I have a lot of gay friends and support sexual diversity,” the singer reportedly said,

Something was likely just lost in translation with all this, but if not, we happily welcome Mr. Ronaldo to the team.

We don’t know about you but that ain’t really no solid Cristiano Ronaldo gay proof, no?

Football star Cristiano Ronaldo appears intrigued and confused after he sees his teammate’s thingie. Poor guy. Hehe. Anyways, who’s your guess on the identity of the other footballer sporting that thingie? Wayne Rooney? Whoever he is, maybe he should form a team with Dancing With The Stars’ Mark Ballas who had a similar “condition” a few months back [See Mark Ballas Boner].

As it happens with famous celebrities, some people with nothing better to do (admittedly, that includes us here at Famewatcher, haha) are asking the “is he gay” question with regards to Cristiano Ronaldo. If you go to Youtube, you see tons of videos which purportedly prove that he is. You know, videos like this one where he appears to fondle a teammate’s “downstairs” area. We think he’s just raising his hands and touching the air but the angle of the camera makes it look like he’s indeed going for his teammate’s nether region. It’s fun to watch for sure.

The next video falls under the “soo bad its good”. It shows a Ronaldo being “effed” right there on the pitch with his football outfits on. It’s so silly and so ridiculous but it’s kinda funny too. Check it out.

Then there are the funny pictures of the Portuguese footballer which sends tongues a-wagging. You know, photos like this one which may mean any of the following: a) he’s gay, b) he’s straight and is pretty secure with his sexuality to be bothered by a flower on his hair, and c) he just loves freaking flowers. 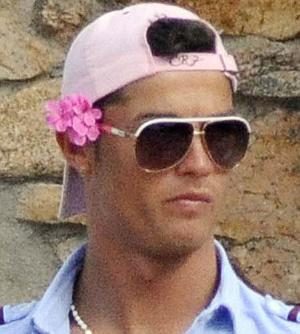 Then we have this one where he appears to be servicing Wayne Rooney. We know of course that no such “servicing” is happening but Rooney’s sorta happy blissful reaction is just too funny. [Related: Frank Lampard and John Terry Underwear Photos]

Some say that Cristiano is gay because of the next photo below. To us however, the photo proves nothing. All it proves is that Cristiano has a nice curvy behind and that he knows how to use ’em to bump some ball.

Because he’s famous and because he’s a beautiful dude, people will continue to speculate about Ronaldo’s bedroom preference(s). We should not really care but we are silly, silly people and it is fun to speculate. Also, given Ronaldo’s public display of fashion often associated with gay men – skinny jeans, tight pinky shirts, Louis Vuitton purse, very short shorts, flowers on his hair – we suspect that he actually wants people to be speculative.

Fashion and skin tanning tip from footballer Cristiano Ronaldo: If you wear a really short shorts during your trips to the beach this summer, you will get a really, really nice tan. Provided that, like Ronaldo, you make sure you’re bulging down there and that there’s a paparazzi to catch you in your short shorts.

Forgive us if we’re being totally silly. We totally don’t know what to say of these photos. Hehe. 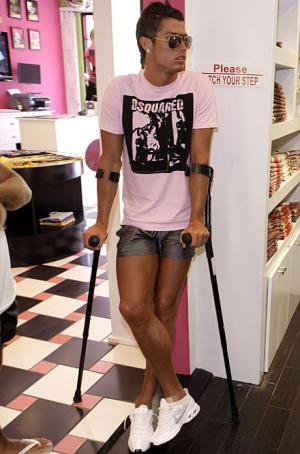 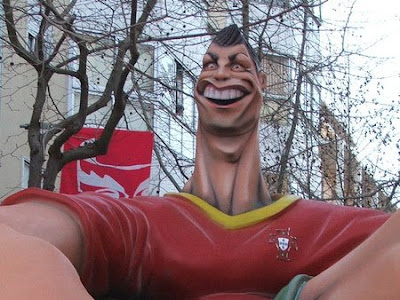 Hey look some Cristiano Ronaldo superfans have created a likeness of the Portuguese footballer and they must really really love his balls.

What say you, fans of David Beckham? Seems like you are being out-balled by the Cristianistas. Hehe.