Cory Monteith Underwear: Boxers or Briefs? We love us our Cory Monteith so here’s our second post on him today. We’re bringing you his underwear photos, from his 2005 movie Killer Bash, which could answer the “boxers or briefs” question often asked of male celebrities. 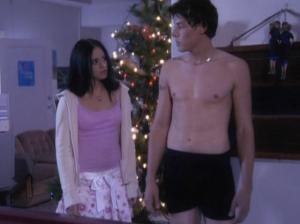 More pics of Cory in his black boxer shorts after the jump. 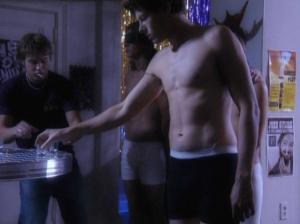 UPDATE: More photos of Cory Monteith wearing a pair of white boxer shorts from a recent Glee episode. Nice one Cory, but next time you should go for tighty whities. 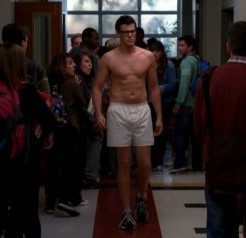 Well, here’s a video where our cute Canadian Cory talks about guys talking to guys about guys who like guys. He’s supporting a group called Straight But Not Narrow and we think that that’s a good enough answer to the “is he gay question”. So Kevin and Deena, our Cory is straight but not narrow, okay? Awesome, cool, and typically Canadian. [Update: Kevin, ever the optimist, asks whether “but not narrow” means Cory is open to, ehem, other possibilities. Hehehe.]

Hah. Check out this video of Cory in the 2005 horror movie Killer Bash. The movie was directed by David DeCoteau who’s known for making movies with gay undertones.

Some Cory Monteith underwear still photos from the movie. 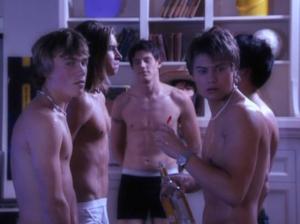 It’s in French. We don’t know if this movie was filmed in French or whether this was a dubbed version. Some of you are like, “Can you give us the English version!!!!” but we’re not gonna do that because we think you’ll actually appreciate our Cory and the other shirtless guys speaking in French. Everything’s hotter when it’s in French, right?