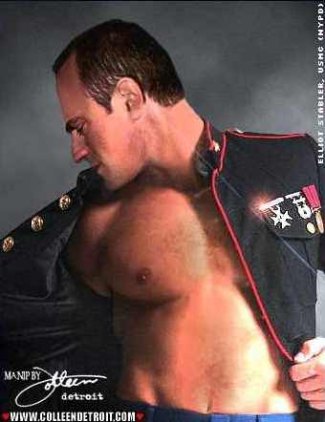 Is Christopher Meloni Gay? One of the perks of being a highly paid actor is that you get to make out with cute guys. Hehe. Christopher making out with another dude in the television drama, Oz. [Call for help: If you know the name of the other guy, please do tell us in the comment section. Kevin says its Lee Tergesen but he is not sure if he is correct.]

Can you hear the heads of Republican “Christian” evangelicals explode after watching the above scene. Haha. Meanwhile, in the next photo below, Alexander Skarsgard, Meloni’s co-star in True Blood, isn’t about to be left out in the “I kissed Chris Meloni” train.

Neither will Dan Florek. Seriously, who wouldn’t want to make out with a hot-construction-worker-turned-TV-star?

When it comes to rubbing skin cells with Meloni though, probably the luckiest guy of them all is his Oz co-star Lee Tergesen with whom he wrestled….

… and whatever it is the two are doing here.

Christopher Meloni Wife. Yes Chris is married. Her name is Doris Sherman Williams. They tied the know way back in 1989.

Check out the Christopher Meloni underwear photos after the jump.

Christopher Meloni Underwear. Now, we know that some of you Famewatchers, particularly the “does he wear briefs or boxers” community, are less interested in Chris’s gay kisses and on whether he is married or not but you need not fret because we have not forgotten about you.

Here’s Chris, from an episode of Law and Order, wearing a really skimpy and tight pair of blue briefs. All together now let’s sing (to the tune of Yellow Polka Dot Bikini): He’s in his itsy bitsy, teeny-weeny blue…

And boxer briefs. [Deena asks: Are we sure that this is not photoshopped?]

And, the most interesting Chris Meloni underwear photo of them all: He’s wearing women’s panties and a bra.

Now the last pic gives Chris the right to be included in our honor list of Men Who Wear Women’s Underwear. You agree, right?

Lastly, here’s a pic of our Christopher Meloni in a pair of boxer shorts. If we are not mistaken, it’s a screencap from an episode of his short-lived sitcom Surviving Jack.