Christian McCaffrey Shirtless and Underwear Photos, Part II. We are updating this post in less than a month because our football hunk has done a modeling gig for the men’s fashion bible.

By men’s fashion bible, we mean GQ Magazine. And by modeling gig, we mean Christian posing in various states of undress. Like, you know, him sitting down in a pair of Calvin Klein briefs, or him standing in the hallway with a towel wrapped around his waist, or him simply chilling in a pair of short shorts.

Of course, he models fully clothed too but we know that the Famewatcher THOTs among us (headed by their head cheerleader Deena) are less interested in those. Anyhoo, here are said photos. But you should also check out his GQ interview because he comes across as a smart and thoughtful young man. 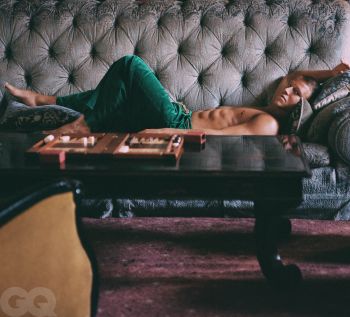 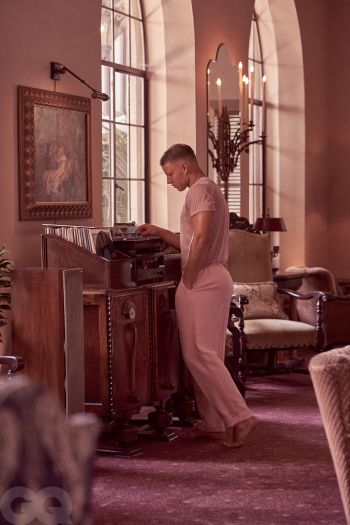 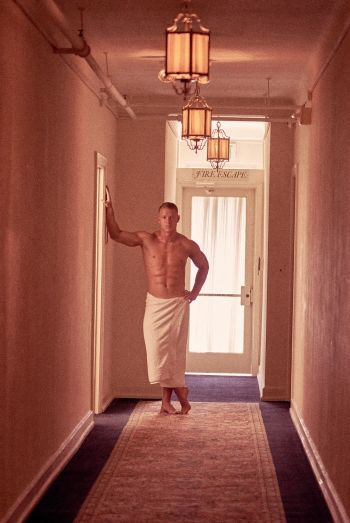 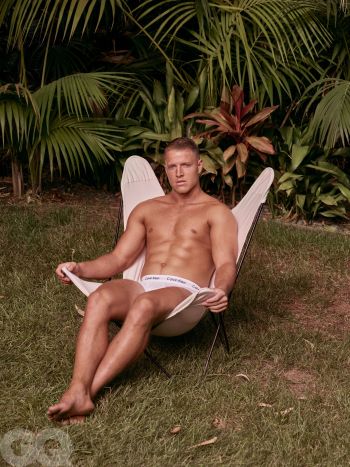 …..
Christian McCaffrey Shirtless, Underwear, Sponsors, Earnings (Posted 1 September 2020). We haven’t talked about a hot NFL player for a long time so let’s blog about another one, eh?

Famewatchers, meet Christian McCaffrey, running back for the Carolina Panthers.

He’s male model gorgeous, tall (1.8 m), sculpted like a Greek god with all the right muscles in all the right places, and is very very loaded. Oh, by loaded, we mean he is richie rich rich so get your mind off the gutter. Although, being young and all, we do not think he’s got an issue in that other department. 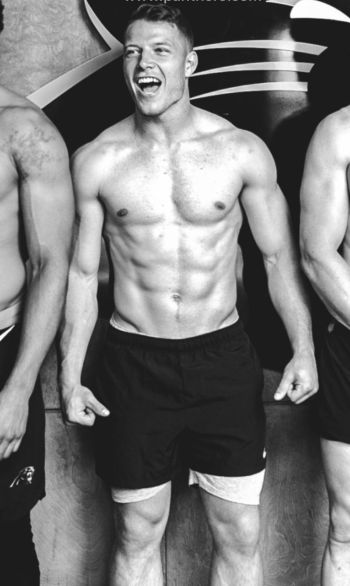 Now, just how rich is Mr. McCaffrey? According to Forbes Magazine, he is one of the world’s highest paid athletes and, as of 22 May 2020, the hot football player has banked $26.5M.

He’s going to get richer too because per Forbes, the “Carolina Panthers rewarded him in March 2020 with a four-year, $64 million deal that makes him the highest-paid running back in NFL history”.

Christian McCaffrey Sponsorships. To date, the football star made $3 million in endorsements. He currently has sponsorship deals with Nike, Bose, Lowe’s, Pepsi, Nerf, and the United Services Automobile Association (USAA). 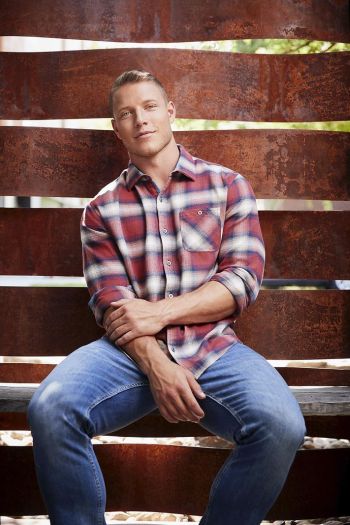 Christian McCaffrey Shirtless and Underwear Photos. Here are some shirtless photos of the hunky athletes for those of us who are fans of shirtless celebrities. Now, ain’t that actually 100% of us Famewatchers? 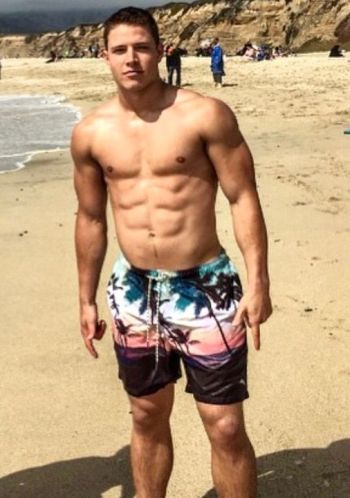 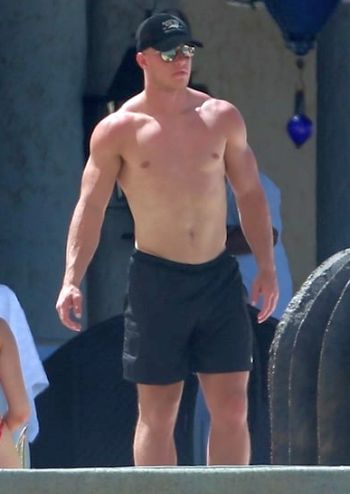 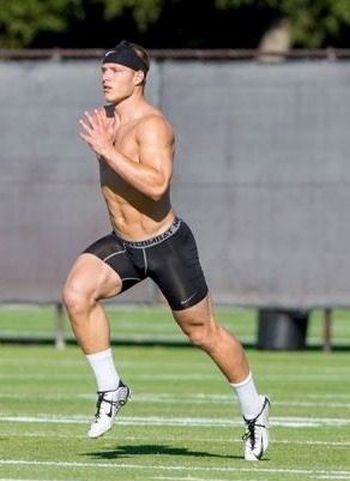 Christian at the NFL combine where prospective recruits are weighted, measured, judged, and ogled at as they run, bend, and do other physical stuff in their underwear. 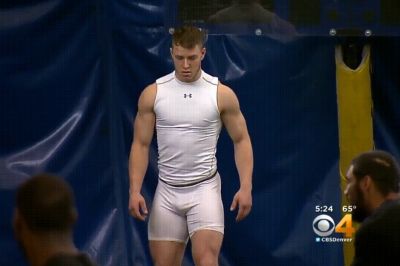 As a non-American, the NFL combine is probably the weirdest rite of passage we’ve seen in sports. Whoever initially thought of it must actually have a thing for ogling at young men in their underoos. Sure, they are actually wearing performance shorts if you want to be technical about it, but the outfits are practically underwear-as-outerwear with how revealing they are. 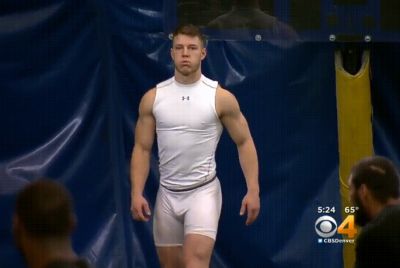 Christian McCaffrey Gay or Straight? Relationship Status? He is, of course, straight and is dating girlfriend Olivia Culpo who was crowned Miss Universe 2012. Here’s the lovebirds having fun at the beach. 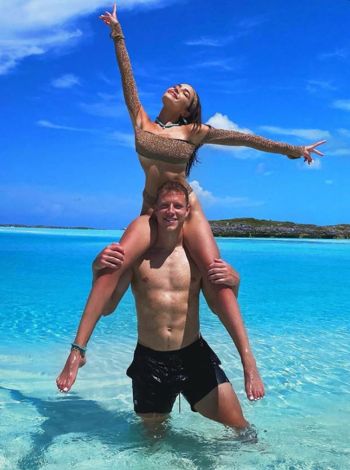 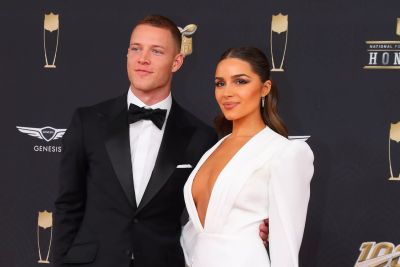 Christian McCaffrey College Football Hunk. Our hot football player was every inch a hunk back in his college footballing days in Stanford. Damn, those abs sure are impressively sculpted, no? 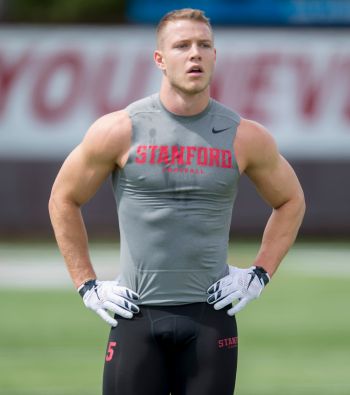 Apparently, he did some runway modeling for Inside Anne’s Closet, a charity fundraising event to raise funds for the Colon Cancer Alliance. Awww, good for you, Christian. 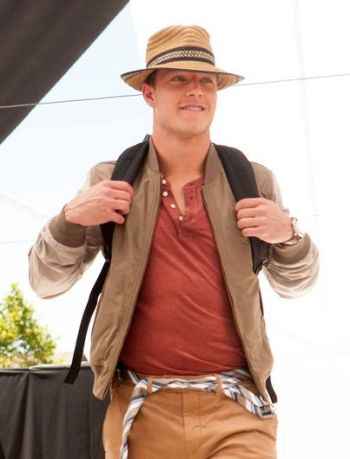 Christian running as running backs do. 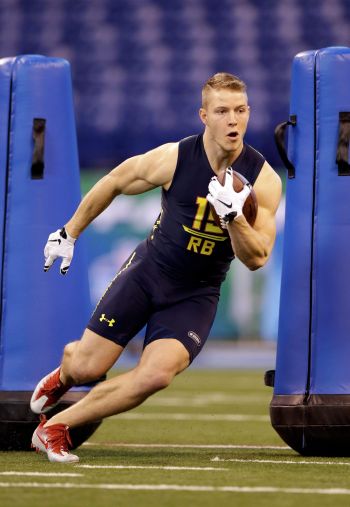