Christian Bale Underwear Workout: Patrick Bateman in American Psycho. Ever worked out in your underwear? How was it? We’re pretty sure it made you feel more free because no outfits got in your way and hindered your movement. Of course, you have to do your clothes-free workout in the privacy of your own home. 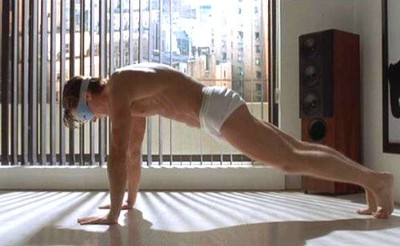 Truly there are advantages to working out in your undies. Christian Bale’s character in American Psycho, Patrick Bateman, is obviously a fan of it as he is seen in the movie exercising in both a pair of boxer shorts as well as in his tighty whities. He stretches in them for instance as you can see in the GIF below.

Now, do some ab crunches. In the movie, our title character boasts that he can make a thousand reps. Do you think he can really do it? Nah! Maybe he can but we doubt he can do it in out sitting, i.e., he can do 50 reps now and another 5o reps the next day and so on and so forth until he makes 1,000 reps total.

Now, if you want to as in-shape as Bale in American Psycho, you might want to check out this Youtube guy who’s doing what he calls the “American Psycho Advanced Core Exercises”. It’s an instructive workout video which pays homage to the movie.

Nice, huh? The guy’s quite a looker too. The only thing we didn’t like is that he didn’t work out in his boxer shorts. Hehe. Yeah, we are shallow that way as you already know. But we do think that this video would have gone viral if he followed Patrick Bateman choice of outfit while working out. What a missed opportunity. Hehe.

Let’s end this post with still photos of Christian doing his workout moves for those of you more into pics rather than GIFs. 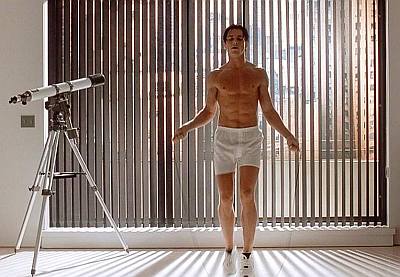 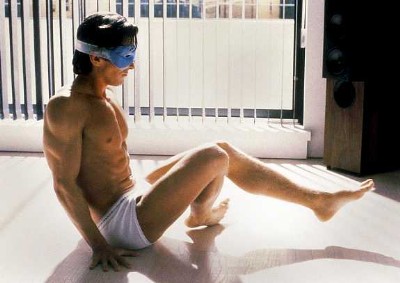