Chris Evans Underwear. Does Chris prefer boxers or briefs underwear? Unfortunately, we don’t know his underwear preference. But we do have a photo of our Fantastic Four superhero in his somewhat revealing thermal long johns underwear. To us, these long johns are more interesting than your run of the mill short undies.

God, isn’t he beautiful? He’s proof that you don’t have to show a lot of skin to be sizzling hot, no?

UPDATE (11 October 2011): Question answered. Chris Evans wears boxers. In his movies, that is. We still don’t know what he prefers in real life. Anyhoo, these still photos are from two of his recent movies: The Losers in 2010 and the 2011 romcom What’s Your Number where he co-stars with the talented Anna Faris. 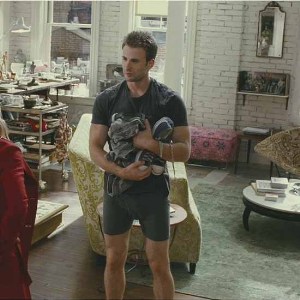 Chris Evans in Spandex – Fantastic Four Superhero: Man, he also looks awesome covered up in his spandex bodysuit. Johnny Storm/Human Torch in lycra is so much cooler than Spiderman, no? However of all the bodysuit-wearing-superheroes, no one can beat Superman in terms of cool awesomeness.

More Chris Evans Underwear Photos: We more more underwear photos from this 31-year-old American hunk so let’s include them here, shall we? He’s really a boxer briefs kind of guy. 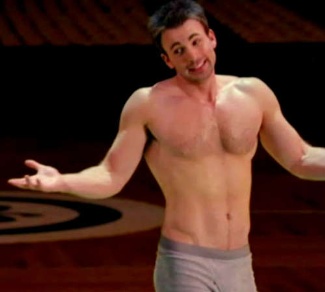 Of course you want the GIF version of the above photo, don’t you?

Who says you can’t play basketball in your boxer briefs? Certainly not our Chris.

Is that Bjorn Borg undies? The former tennis champ turned underwear designer would be very proud. 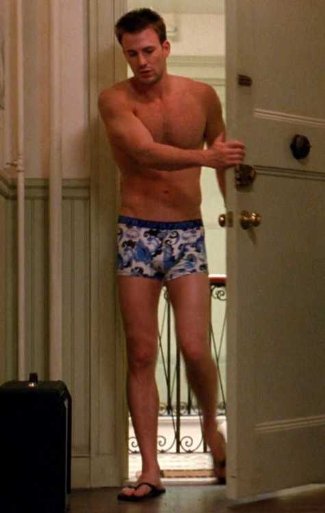 …..
D’ Atlantis Wrist Watch For Chris Evans: Are you wondering about the kind of watch Chris Evans wears? Well, here’s a photo of our superhero wearing a D’Atlantis watch. D’ Atlantis is a fairly new brand established in 2006 but it is known for making transparent skeletal watches that reveal what’s inside your watch. Pretty cool, huh? 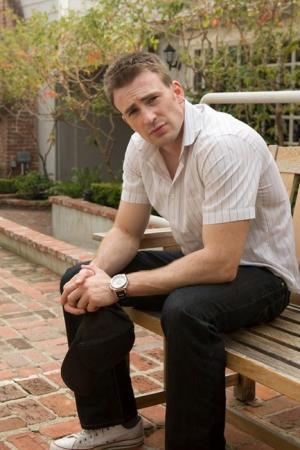 …..
Chris Evans is Captain America in Tight Shirt + Slim Khaki Pants: Look who’s rocking his tight shirt and slim khaki pants? It’s our imaginary celebrity boyfriend, Chris Evans. He’s looking oh-so-shaggable but we’re a little turned off by his really weird feet. Good thing that its actually a prosthetic and not his real feet. Our Chris is shooting Captain America in London which is why they gave him the weird prosthetic feet (which, although its a turnoff for us, may excite some of the foot fetishists among us Famewatchers). 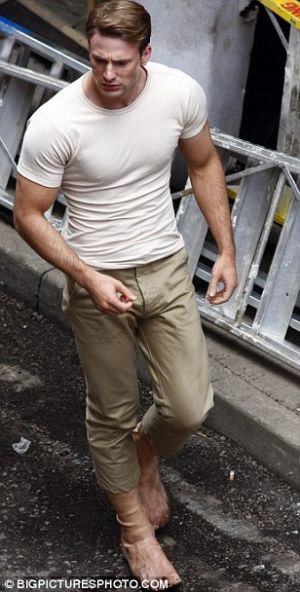 Anyhoo, here are more pics of Chris in his body hugging tight shirt and slim khaki trousers. Woohoo, them muscles are really trying to burst out of his shirt, no? 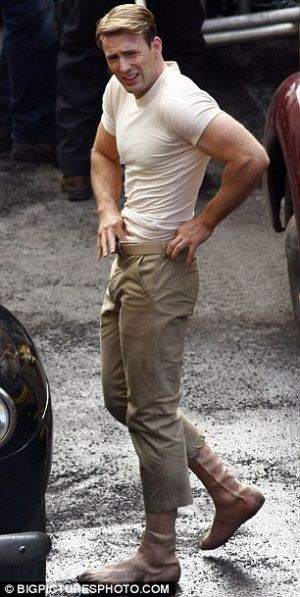 Damn, ain’t this guy hawt? We wonder if his popularity will explode with his Captain America movie. We’re betting a hundred bucks it will. 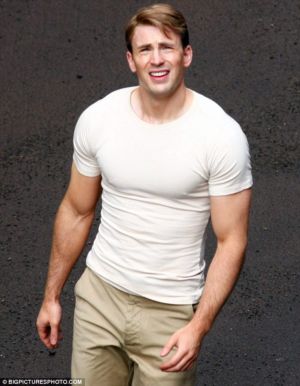