Chris Cuba Underwear Model: Cin2 and CK Briefs – Photos. This American male model named Chris Cuba would be what our friend Deena calls an A-List hunk. No person in their right mind will disagree with her. After all, Chris Cuba is every inch a hunk: he’s got muscles in the right places, he’s cute and handsome, he packs his briefs as you can see in the picture below, and he oozes with sex appeal. If those are not the qualities of an an A-List hunk we don’t know what are. 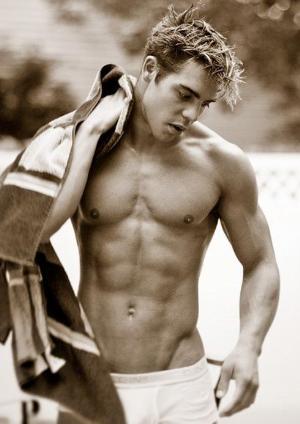 Aha, this is how models should pose when they are advertising underwear. Haha.

Chris Cuba [who apparently also goes by the name of Chris Campanioni] is a 23-year-old made model based in the best city in the world a.k.a. New York. He appeared in ad campaigns for the likes of C-in2 Underwear and MAC Cosmetics. He also appeared in the TV soap All My Children and was featured in the photographic book Hot Games: Secrets To Mindblowing Sex. He is set to become a cover boy in an upcoming issue of Tetu Magazine.

You loved our earlier post on Chris Cuba so we’re posting more pictures of this American stud. Earlier, he was wearing Cin2, this time our Chris is packing his Calvin Kleins.

Moreover, here’s some more information about Chris from his model page: “Hey what’s up everyone? My name is Chris, I’m 23 and as you can see from my list of credits, I’ve been modeling for a good year and a half. I enjoy doing all kinds of work but perhaps my forte so far has been underwear and fitness gigs. I’m looking to do more commercial fashion and continue acting. If anyone (model or photographer) wants to shoot together, let me know and we can make it happen. I typically only take paid gigs, but I’ll consider anything that will help progress my book.”

So fellow Famewatchers, what do you think of our Chris as a male model? Woof. Woof! Want more men in briefs?

Note: Some photos referred to in this post have been moved to our Male Celebrity Underwear gallery. Check them out in the following link: Sexy Underwear Hunks.