Celebrity Third Nipple: Lily Allen. We may not like her take on illegal drugs (she wants you to try them) but we should give props to British singer Lily Allen for being proud of her third nipple. And she wants people to see it too because there’s nothing wrong with having one. Did you hear that, Friends! There’s nothing wrong with having a nubbin so stop teasing Chandler Bing about it. Okay? 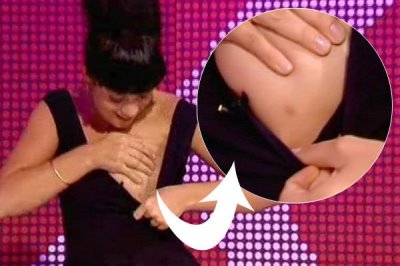 Here’s another photo of Lily making people aware of her nubbin. 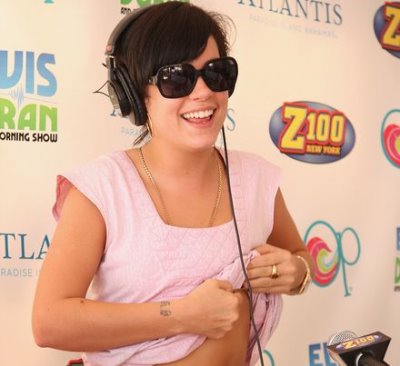 Do you know any other famous person that we can add to our celebrity third nipple list?

OTHER BLOG ENTRIES WE WROTE EARLIER ON LILY ALLEN:

Uh. Uh. Lily Allen will surely get in trouble for saying this: “Parents should say, ‘Drugs might seem fun, but they do funny things to your brain. Some people react to it good, some don’t. Try it and see what you think’.”
But we’re also sure that she will find an ally in the greatest swimmer of all time, Michael Phelps, who was famously busted for sucking on a bong last month.

The News of the World reports on Lily’s latest thoughts on drugs and and her celebrity status: “If I hadn’t been famous I’d have taken loads. Wouldn’t be too wise right now. I’ve never been good with cocaine or drugs like that. They make me passionately angry on everything. I steer clear of heroin or crack. Mothers and sisters should be role models. Not pop stars or actresses.”

Well, we must say that we agree with her that kids should have role models among people close to them. But at the same time, celebrities should also be mindful of the fact that, whether they like it or not, people look up to them to be a model of, well, good manners and right conduct or something like that.

Uhm, whatever happened to professional courtesy? According to The Sun, Lily “Kids Should Use Drugs” Allen went like this: “There’s a guy called Mike Skinner who records as The Streets and he did a record that basically talked about how awful it was to be rich and famous. I found that really boring. I’m always aware when I’m writing songs that other people have to be able to relate to them. If you look at a song like Not Fair, I think probably quite a lot of girls feel unsatisfied by their boyfriends in bed. I do. I think girls relate to that.”

Your turn, Mike Skinner. What say you of Lily’s dissing of your brand of music?

Does Lily Allen have a big mouth or what? Yes she does. She’s got a big blabber mouth in the mold of Barbie Orr; both girls love to talk about the size of their boyfriend’s manhood.

Says Lily on Tom Dinsdale’s thingie: “Well, he’s hot. He’s cute, isn’t he? I had a sleep-over two nights ago and he came along. Quite young, for me. What d’you wanna know? How big his c*** is? It’s very nice.”

Lily and Tom are a perfect pair ain’t they? One’s got a big mouth, the other’s got a big microphone (maybe as big as this serpent). It’s a match made in heaven.