Other celebrity Playboy bunnies are Grace Kim (below left) and Lisa Rinna (below right). [Update: We’ve been told Lisa wasn’t a Playboy bunny at all. But she posed as a Playboy Covergirl.]

Grace Kim (below left). This Korean girl is a Playboy bunny. Isn’t she hot? 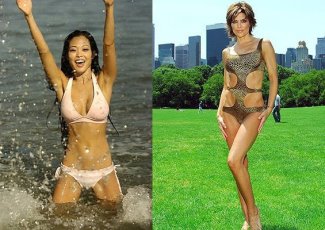 Lisa Rinna: Look who’s going to pose for Playboy at the ripe old age of 45? It’s Melrose Place star Lisa Rinna. Why is she doing it?

She says, “I want to encourage other women to be proud of their bodies no matter what age or size. After doing Dancing with the Stars, I definitely have a better body now than I did 11 years ago.”

Lisa will be on the May 2009 issue of the magazine.

Crystal McCahill: Which girl next door got herself busted for DUI? It’s Crystal McCahill of the E! reality show The Girls Next Door. That’s her in the above mugshots.

The Chicago Sun Times report of her arrest as well as her upcoming Playboy appearance:

Crystal McCahill is set to make an appearance in Playboy magazine as Miss May 2009. But first, the Chicago area woman must appear before a Cook County judge in connection with a Jan. 7 DUI arrest.

The 5-foot-7 brunette, who has also appeared on the E! Playboy reality show “The Girls Next Door,” had a blood-alcohol level of more than twice the legal limit when she drove a 2005 Volkswagen Passat through a red light at Chicago and Wood, according to a Chicago Police report.

McCahill, 25, told police, “I had three shots at Climax [nightclub], where I work,” according to the police report. Police said McCahill “mumbled,” had a “strong odor” of alcohol on her breath and had “red-bloodshot and glassy eyes.”

Famous Men as Celebrity Playboy Bunnies and Coverboys? According to Page Six, comedian Seth Rogan is going to be a Playboy Magazine cover boy which will come out this March 2009. He will reportedly pose with Jason Kidd’s baby mama, Hope Dworaczyk. 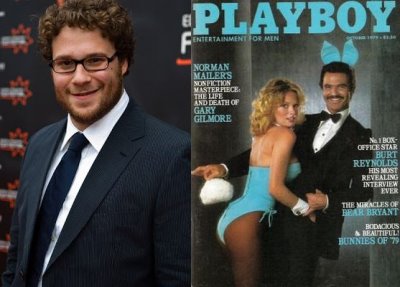 Anyways, while we are waiting for Seth’s cover photo, let’s take a look at those who came before him. Like Burt “The Moustache” Reynolds.

Who’d you rather: Steve Martin or Peter Sellers. 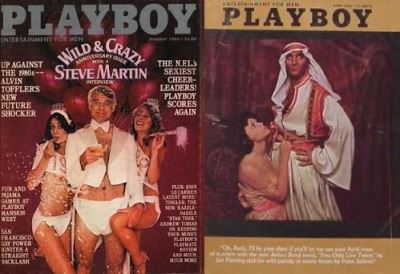 Who is the better Playboy coverboy, Jerry Seinfeld or Donald Trump? 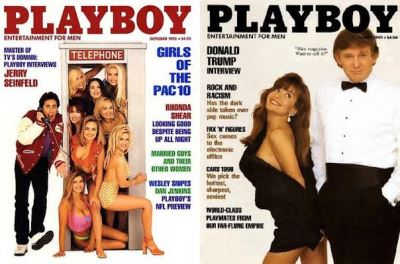 In conclusion, what do you think of these famous celebrity Playboy bunnies and covergirls/coverboys? Lastly, if you know other celebrities who were bunnies or cover girls or cover boys, tell us in the comments.