Celebrity Nike Shorts: Hayden Christensen. Look who’s looking good in his Nike shorts? It’s Anakin Skywalker himself. Glad to have you back, Mr. Skywalker! Where have you been hiding these past years? A cave somewhere in a galaxy far, far away?

Seriously, what has Hayden Christensen been doing since the year his last Star Wars movie was released in 2005? Instead of joining the ranks of Hollywood A-Listers following his Star Wars films, his light kind of fizzled out to the point that people would be forgiven if they think of him as a has-been. 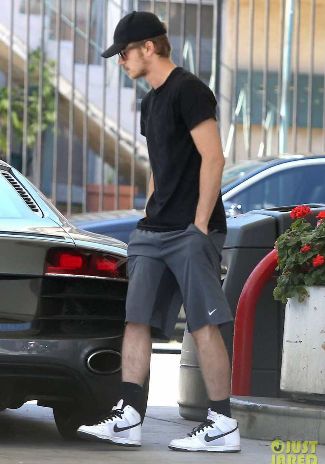 Whether he’s a has-been or not (the four of us Famewatchers are unanimous in saying that he’s not), its pretty obvious that he looks good in his Nike shorts such that we’re hoping he’ll do a basketball movie as his comeback project.

Anyhoo, for those of you who are wondering about what this Canadian hunk have been up too these past years, we know that you’d be happy to know that he didn’t go hide in a cave in a galaxy far, far away. In fact, he actually has done some movies although these tend to be the non-blockbuster types.

His IMDB page also states that he will be headlining a drama called Battlecreek about “a gifted young painter with a rare skin disorder must live his life at night”. He’s also slated to star in a thriller called The Diplomat about a junior diplomat who is “thrown into a violent conspiracy when his daughter witnesses the murder of the US Ambassador to Ireland”.

Interesting movies to look forward to eh, Hayden Christensen fans? By the way, we should also mention that our Hayden is dating Rachel Bilson.