Celebrities With Baume et Mercier Watches. Baume and Mercier is a Swiss luxury watch company established in 1830. It is most probably known for its Riviera model which was launched in 1973. Other popular models from the company include Hampton, Capeland, and Classima Executive.

Let’s make a list of celebrities or famous people who own Baume et Mercier watches. Let’s begin with our imaginary boyfriend Gary Sinese who’s wearing a Riviera model in the above print advert. Oh, did we say that he’s is our boyfriend? Yes we did! We fell in love with him (particularly with his soulful expressive eyes) in that movie Of Mice and Men which he also directed. He should have been nominated for that movie in both the acting and directing categories. 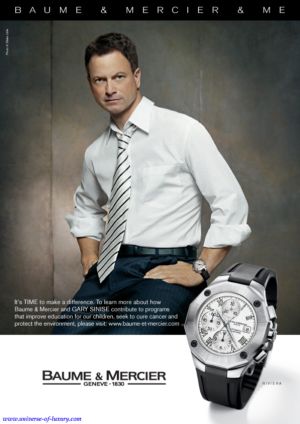 Next in our list of Baume-wearing-celebrities is pretty boy/male model-turned-successful-TV-producer Ashton Kutcher. Here’s an advert from the Swiss watchmaker featuring the former Mr. Demi Moore (or Mr. Twitter King?). 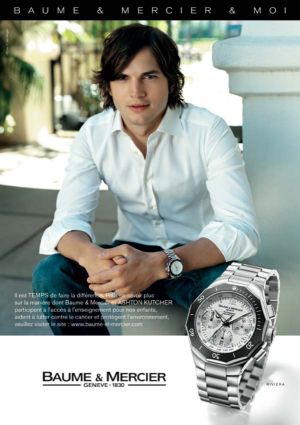 Let’s move along and check out X-Files star David Duchovny and his Baume & Mercier Hampton Watch. Hampton is one of the more popular models but the Riviera, worn by Gary and Ashton above, is still the most popular watch from the company’s product line. 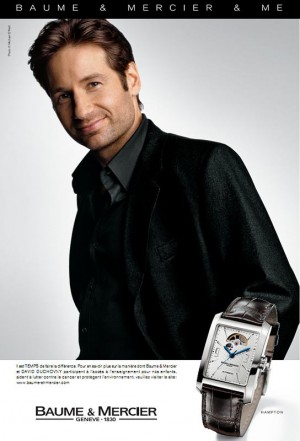 If you’re going, “Does Baume have ladies watches? Why are only male celebrities the ones being featured?”. The answer to your question, is that yes, B&M has watches for women. And female celebs wear the watch too. In fact let’s check out Canadian beauty and Lost actress Evangeline Lilly and her watch. In case you are wondering, that’s an Ilea Ladies Wristwatch. 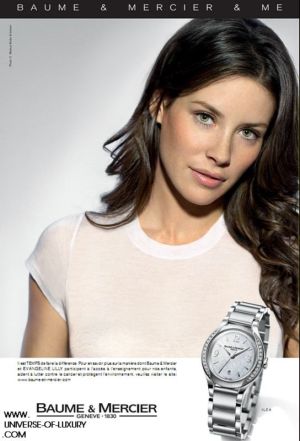 Here’s another famous girl and her Baume and Mercier: Meg Ryan and her Diamant ladies watch. You know, of course, that she starred in some delightful rom-coms such as Sleepless in Seattle and You’ve Got Mail, right? According to our friend Kevin however, Meg lost her luster when she shacked up with Russell Crowe while still married to Dennis Quaid. Do you agree with Kevin? She used to be a Hollywood A+ Lister but she’s totally out of the entertainment radar now. 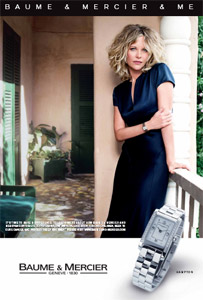 Anyhoo, let’s close this list with real-life-cowboy Kiefer Sutherland. 24’s Jack Bauer is wearing a Riviera watch in the picture below. 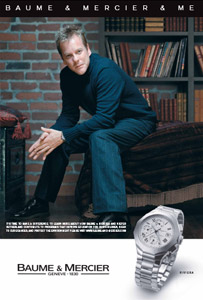 All these celebrity guys and gals wear a part of a 2008 Baume and Mercier advertising campaign. What’s cool about the campaign is that the talent fees of the celebrities who took part were donated to a charity (or maybe charities).