Celebrities Who Practice Reiki Therapy. Eleven years later, the only celebrity who we can say that we legitimately witnessed practicing Reiki therapy is our imaginary dancing boyfriend Matt Bomer.

But him being a Reiki therapist — on level three at that — is only on the big screen, i.e., Magic Mike XXL where he played the role of a stripping Southern hippie. On real life, we cannot say whether Matt really is into this practice of energy healing.

Confession: We are only making this update to this post because we want to publish this photo of a shirtless Matt. Joke. 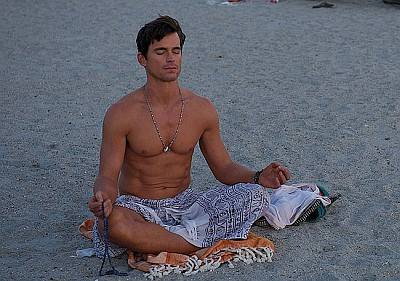 …..
Celebrity Reiki “Fans” (30 March 2009). Who among our favorite Hollywood celebrities are fans of Reiki therapy. The internets claim that the likes of Nicole Kidman, Angelina Jolie, Naomi Watts and Kate Hudson practice this alternative therapy.

Do we believe that these celebrities are really Reiki therapy adherents? Nah, anyone can make a celebrity list and claim that said celebrities are such and such. For instance, if we claim that Brad Pitt, George Clooney, and Matt Damon are following our “Stare at Your Navel and You’ll Get Healed” healing technique, which we here at Famewatcher invented and promote, would you believe us? We’d sell you the Brooklyn bridge if you do.

Unless we see a news report where Angelina Jolie or Ellen DeGeneres categorically state that they use Reiki therapy, we would remain very suspicious of the above list.

Not that we’re saying that Reiki therapy is not effective. As we said in our original post, we don’t know if it is good or not as we’ve not tried it ourselves. Maybe it works. Maybe it doesn’t.

Anyhoo, for more health related stories, check out our post on the bad effects of tanning beds. You might also want to check out this list of Celebrities With Prostate Cancer.

…..
Effects of Reiki Therapy: Good or Bad? (posted 27 March 2009). Is Reiki Therapy good or bad? We still haven’t tried it so we can’t say either way. As we are open to different kinds of healing we do not discount the possibility of doing Reiki in the future.

Anyways, a group of Catholic bishops is warning their members to beware of Reiki therapy. We must say that we are wary of religious leaders when they poke their fingers on matters of health. And we find it funny when they label Reiki as “superstition”. One man’s faith is another’s superstition, eh?

From the Sydney Morning Herald: “The US Conference of Catholic Bishops (USCCB) has warned Catholics to shun the eastern healing art of Reiki because it lacks scientific credibility and is dangerous to Christian spiritual health. ‘Reiki therapy finds no support either in the findings of natural science or in Christian belief,’ the USCCB doctrine committee said in a document issued.”

More from the Aussie Catholic bishop’s statement from SMH: “In health terms, using a therapeutic technique that has no scientific basis ‘is not generally prudent’, said the eight bishops on the committee, which in the past has issued guidelines on how to minister to ‘persons with homose*ual inclinations’ and frequently asked questions about why only men are ordained. In spiritual terms, using Reiki carries ‘important dangers’ because the therapy is based on the theory that illness can be healed by rebalancing ‘universal life energy’, or Reiki, by a laying on of hands by a trained master, and that clashes with Christian belief, the bishops said.”

Eh, sounds to us like these bishops are just jealous gatekeepers. We’d only listen to them if they stop abusing kids under their care and if they prosecute abusive bishops and priests.