The guys who hacked Ashley Madison — who call themselves The Impact Team — have released the information they gathered from the cheating website. Not surprisingly, some famous names are being unearthed from the data dumped by the hackers.

Here are some celebrities and famous people with Ashley Madison accounts: 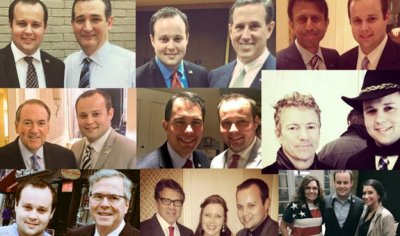 We give props to Gawker for unearthing the info on Josh Duggar’s Ashley Madison membership. More details from Gawker:

Someone using a credit card belonging to a Joshua J. Duggar, with a billing address that matches the home in Fayetteville, Arkansas owned by his grandmother Mary—a home that was consistently shown on their now-cancelled TV show, and in which Anna Duggar gave birth to her first child—paid a total of $986.76 for two different monthly Ashley Madison subscriptions from February of 2013 until May of 2015.

Celia Walden, journalist married to Piers Morgan. She admitted on her morning show, Lorraine, that she has an account with Ashley Madison. Did she sign up to cheat on Piers? Our friend Deena says she would cheat if she’s married to Piers “Effin” Morgan. Hehe.

Now, before you go judging Celia for having an Ashley Madison account, she actually signed up for a journalistic purpose, that is, writing an article about Noel Biderman who founded the cheating website. Her article was published on The Telegraph back in 2010.

Celia said that she had signed up to the site several years ago as she part of research for an article on the website’s founder Noel Biderman.

The journalist explained that she was doing an interview when it was suggested that she sign up and find out first hand what it was like to use the site.

Michelle Thomson, Member of Parliament (MP) – UK House of Commons. She says that someone stole her email address and used it to sign up for Ashley Madison membership without her knowledge.

Here’s her statement (via The Guardian):

Along with potentially millions of others, an out-of-use email address seems to have been harvested by hackers. I am not aware of, or in contact with, either Avid Life or Ashley Madison and look forward to finding out more about what has actually happened.

“However, having a personal email address linked to an account doesn’t mean that person is really a user of Ashley Madison. Users are able to sign up to the site without responding to an email verification, meaning anyone’s email address could have been used to create an account.

Developing. Watch out for future updates to this post.