Caster Semenya Gender Identity Scandal in Athletics. We have nothing but sympathy to South African runner Caster Semenya whose gender is being questioned supposedly because of the dramatic improvement in her race results, her muscular build, and her deep voice. What? Are we saying that women can only improve slowly, shouldn’t be muscular, and should always have a high pitched voice? 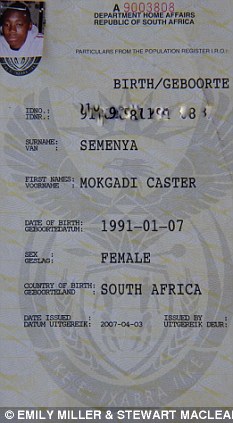 Athletics authorities have reportedly conducted a “gender test” to determine that she is a woman and not a man competing in a woman’s event.

Yahoo reports: “Her dramatic improvement in times, muscular build and deep voice sparked speculation about her gender. Before the race, IAAF spokesman Nick Davies stressed this is a “medical issue, not an issue of cheating.” He said the “extremely complex, difficult” test has begun but results were not expected for weeks.”

Yahoo adds: “The test requires a physical medical evaluation and includes reports from a gynecologist, endocrinologist, psychologist, internal medicine specialist and gender expert. South Africa team manager Phiwe Mlangeni-Tsholetsane would not confirm or deny that Semenya was having such a test.”

The South African team manager had this to say about the matter: “We entered Caster as a woman and we want to keep it that way. Our conscience is clear in terms of Caster. We have no reservations at all about that.”

Here’s another picture of Caster. Okay, we admit she’s muscular. But because we don’t see a bulge under them tights, we are going to declare her a woman. Don’t question our decision. After all bulge watching male athletes is one of our expertise in this blog. Joke. Joke. 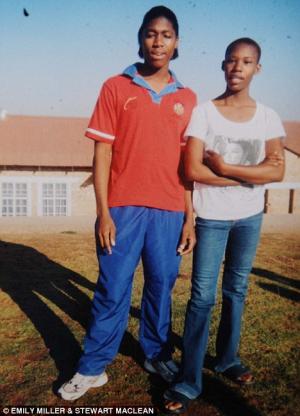 Caster Semenya Gender: Is She an Intersex?
21 August 2009

People who are experts on gender and sexuality issues have a word for what may be the condition of South African runner Caster Semenya: intersex.

According to the Intersex Society of North America, (ISNA) intersex is a “general term used for a variety of conditions in which a person is born with a reproductive or sexual anatomy that doesn’t seem to fit the typical definitions of female or male.”

Experts estimate that about about one in 5,000 babies are born with the condition. Considering that there are more than 5 billion people on earth, that would add up to a lot of people whose gender identity isn’t as clear-cut as we human beings want it to be. 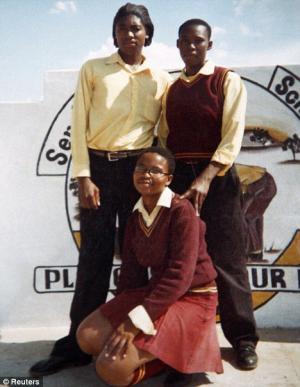 South African runner Caster Semenya’s birth certificate identifies her as a female which should help settle the question whether she is one or not. She was born a girl and was raised as a girl, then she must be a girl.

As we stated earlier, the fact that South African runner Caster Semenya does not have a penis – and must therefore have a vajayjay (thanks Oprah and Joel McHale) – is a good enough proof for us that she is a woman rather than a man.

We’re saying this because we find problematic the notion that you should determine whether a person is a man or a woman by looking at their chromosomes. So what if her chromosomes say she’s XY rather than XX? If she’s got a vajayjay rather than a penis, then she’s a girl. Wrong chromosomes be damned. The best evidence is what the eyes can see, not some gender tests which – because the science is fluid – can change in the future. Who knows what chromosomal variations among humans will they find in the future?

What about those bendy male ice dancers/skaters who dominate Olympic ice dancing/skating competitions? Since “bendiness” is more of a female trait rather than a male trait, shouldn’t we also look at their chromosomes? Sure, maybe those dancers have a penis but do they have the right chromosomes which science dictates they must have?