What could possibly happen to your breast implants after your augmentation surgery? Well, they could leak as in the case of Amy Winehouse’s attempt to enhance her boobies.

It has been revealed that Winehouse’s recent trip to hospital (which we didn’t report on, but still happened) wasn’t due to a bad reaction to medication for a cold, as was reported by some, but because her new breast implants had started leaking. Which, considering they apparently cost her £35,000, seems a bit rubbish.

Speaking on his new online TV show, ‘Mitch Winehouse’s Showbiz Rant’, Amy’s breasts’ official spokesman said: “It wasn’t because she had a cold. She’s fine. She just had a little leaky something or other,” while pointing to his chest.

So there. That’s what could happen to your breast implant. They might make you look good but whatever it is they put in there (is it silicone?) could leak and affect the rest of your body.

Want more celebrity plastic surgery? Maybe you’d like to check out this story on Vaser Liposuction.

What are the possible complications of a breast augmentation surgery? Well, they can leak as Amy Winehouse reportedly found out. Another complication would be the possibility that you will get some kind of infection. Check out this report about Sheyla Hershey, a Brazilian female model who holds the world record for having the biggest breasts (size 38KKK) who had staph infection after her latest breast implant.

OTHER BLOG ENTRIES WE WROTE ON AMY WINEHOUSE

She can be very irritating at times but, sometimes, you gotta feel for Amy Winehouse after this very public dissing of her by Josh Bowman, his St. Lucia beach buddy: “Josh Bowman thinks Amy Winehouse is ’embarrassing, very full-on and strange,’ according to reports. ‘He felt embarrassed by her behavior in front of other guests and he has tried to gently explain to Amy that they should stay as friends not partners’.”

We’d also rather be friends with her rather than be her partner but you gotta give props to the girl for trying to find love. Wake up Amy. It’s about time you change your celebrity hairstyle.

It looks like Amy Winehouse will fail in her attempt to get back with Blake Fielder-Civil because according to reports her husband has fallen for a 17 year old school girl. Says a source (via the Sun) about Blake and his new girl, Francesca Morralee:

“They are trying to keep the whole thing under wraps. It’s been going on since him and Amy separated. He filed for divorce and only then did he ask her out officially.

“They tell each other that they love each other. They seem so happy together he is absolutely devoted to her even though it is early days. He has promised her he wants nothing to do with Amy. She speaks to his mum every day and tries to get through to Blake but he doesn’t want to know.

“Georgette has also reassured her that he has cut all ties with Amy. Blake is in rehab now but when he gets out they want to live together.”

Should we say, “Poor, poor Amy”? Nah. She can always get herself some man in St. Lucia.

Oh man. Amy Winehouse’s bid to get back her man (and his bid to divorce her) has gotten more complicated. Blake Fielder Civil allegedly seduced 31 year old Gillian Morris and gotten her pregnant. The Daily Mail quotes the baby-mommy as saying:

‘Initially I was planning to have an abortion but Blake’s vow has completely thrown me. I never planned for any more children. Our fling was just a bit of fun. I never imagined these consequences. I’m now confused and don’t know what to do.’

Guess who’s making lemonade out of the lemons that life has handed her? It’s celebrity weirdo Amy Winehouse. She is reportedly writing a song called The Ultimate Betrayal which is about the fact that her estranged husband is reportedly having a baby with another woman, Gillian Morris.

Hours after hearing the news, Amy went to her studio on Caribbean isle St Lucia and penned her emotional song. It even repeats the famous line from her biggest hit Rehab: “No, No, No.”

A source said: “Amy still felt they had something between them and that one day they’d be together again. But this news destroyed her.She sat down with her guitar and started writing The Ultimate Betrayal. She keeps repeating the line: ‘Blake a baby, no, no, no.’ It’s very haunting.”

We will upload the lyrics for the song once we have them. Thanks.

We love it when troubled celebrities get their act together, so we’re very happy to read news reports that Amy Winehouse is “good at the moment”. And she’s got a new boyfriend too in the person of director Reg Traviss. Check out their photos.

How sweet, no? Let’s wish these two lovebirds the best of luck. 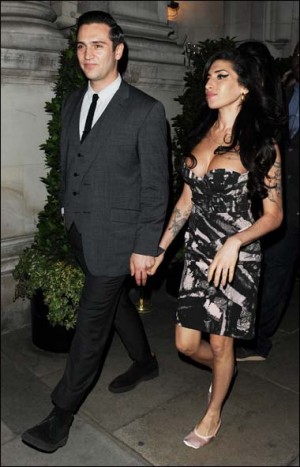 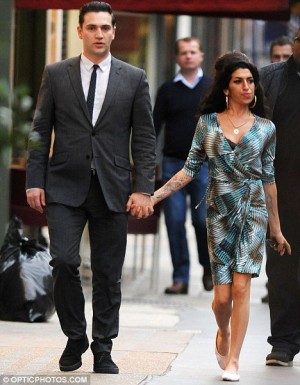