Brad Pitt Underwear: Boxers or Briefs? What kind of underwear does Hollywood superstar Brad Pitt prefer to wear? Is he a boxers kind of guy? Or would he rather opt for a pair of snug, tight, and sexy briefs? Well, we don’t know for a fact what he prefers but we do know that, when it comes to brands, he likes him his Fruit of the Loom. 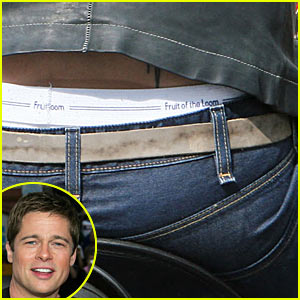 Although he hasn’t commented on his underwear preference, his photoshoots kind of indicate that he is more of a boxer shorts kind of guy. For instance, here’s a Brad Pitt underwear photo where our handsome hunkity hunk poses in his white boxer shorts. 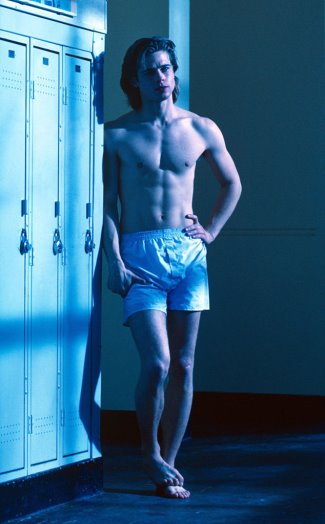 ET Online has the details on the above image: “Yes, this is a picture of Angelina Jolie’s future hubby, shirtless and wearing only his boxers, from 1989. As much as we’d love to say this blue-tinted locker room shot was one from Brad’s personal collection, it’s not. It’s actually a still from a dream sequence of The Kids Are All Right, an ABC pilot that didn’t quite make it off the ground.”

In a photoshoot for Vanity Fair Magazine, our Brad also posed in a pair of white boxer shorts. Want more male celebrity underwear? 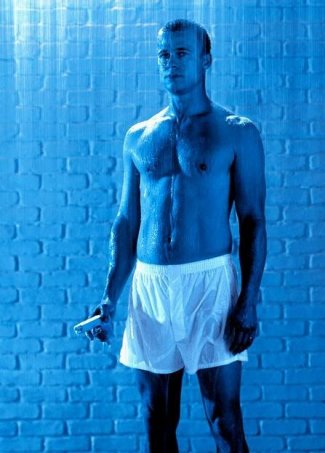 Now, of course, no one can forget this scene in Mr. and Mrs. Smith where our Brad and future wife and future ex Angelina Jolie play assassins assigned to take out the other. 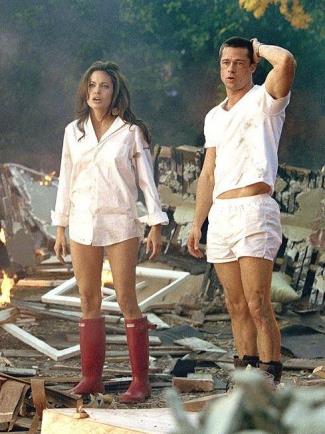 …..
Brad Pitt in Johnny Suede (23 April 2009). Back in 1991 while starring in a movie called Johnny Suede, a young Brad Pitt was seen sporting this rather loose briefs underwear. Back then, Brad was not yet the Hollywood A-Lister he is now so don’t be surprised if the movie only grossed ninety thousand USD in the box office. But Johnny Suede must be a pretty good film for it actually won the Golden Leopard at the Locarno International Film Festival and was nominated for the Grand Jury Prize at the Sundance Film Festival. 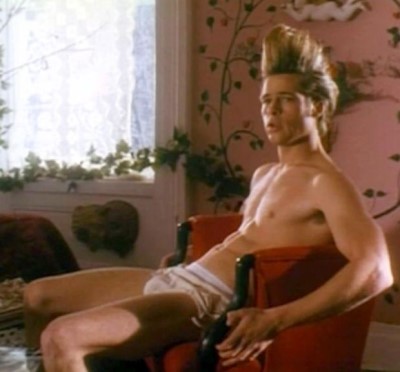 The older version of Brad is a boxer shorts guy but young Brad Pitt as Johnny Suede clearly is a briefs underwear “wearer”.

Brad Pitt Gets Asked the “Boxers or Briefs” Question: At the Golden Globes Award, shaggable male model/TV correspondent Tyson Beckford asked Brad the question that a lot of you wondered about. Sadly, instead of answering the question Brad went, “Oh, really?” and Angelina goes, “That’s my business, man?” Aww. We still love Brad and Angie though. How can we not love them? They’re both fabulous. They make very good movies. And they use their fame and fortune to help other people. Way to go, Brangelina!