Brad Pitt Plastic Surgery 2017 Update. According to a source who blabbed to Radar Online, our Brad has undergone several cosmetic surgery procedures following his divorce from Angelina Jolie. Do we believe it? We don’t know what to believe. Hehe. After all, rumor mongers like RadarOnline and its unnamed source will always be rumor mongers.

Here’s what the source reportedly told RadarOnline: “He’s done fillers, Botox and peels, plus had his eyes tweaked. He feels like death inside, but he’ll be damned if he’ll look like anything but a million bucks on the outside!”

He sure looked young and fabulous when he appeared at the Golden Globe Awards this past January, no? If the above report is true, the rest of Hollywood should go look for Brad Pitt’s plastic surgeon. 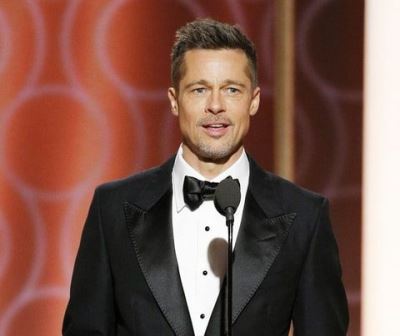 Brad Pitt Plastic Surgery: Fraxel and Radisse Injections? (1 December 2009). Is Brad Pitt always looking eternally youthful because he’s been drinking from some plastic surgeon’s cup? Well, if you believe celebrity watchers from a year ago, then Brad has had some, in the words of Kathy Griffin, “dental work” done. 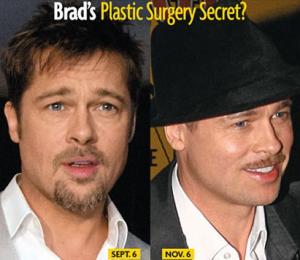 “When Brad stepped out in NYC on Nov. 6, he looked fresh-faced and years younger than he did just two months earlier! According to NYC-based plastic surgeon Jennifer Walden, M.D., who has not treated Brad, he looks like he had both a facial-resurfacing procedure and fillers in his wrinkles.

Dr. Walden explains: “Before, Brad’s skin was ruddy, a result of aging from stress and sun exposure.”

Now “his skin is shinier and there are fewer wrinkles on his face, which indicates he had a resurfacing procedure, like a laser called Fraxel or a chemical peel. It also looks like he’s had soft-tissue fillers, like Restylane or Juvéderm, injected into his wrinkles.”

The photos above are supposedly the “proof” of Brad’s cosmetic work but, considering that he’s got a hat in one photo and no hat in another, let’s not put so much worth to these photo differences as “evidence”. 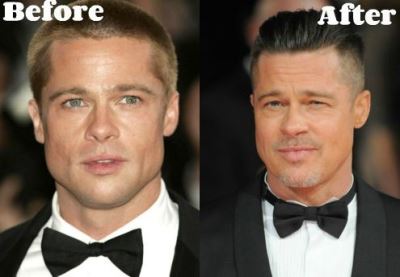 Earlier we reported that Brad Pitt allegedly had some secret cosmetic surgery where he had Fraxel or chemical peel. Now, here’s another report alleging that the Hollywood A-Lister may have had Radiesse injections.

Forty-six year-old Pitt paid a visit to the office of Dr. Mark Rubin, his long-time Beverly Hills cosmetic surgeon, before the production of his new movie “Moneyball” began, the source said. His wife Angelina Jolie approved of the procedure that was effective in making Pitt’s face more radiant and looks brighter, the source said.

Not only Jolie liked to touch Pitt’s face after the makeover but also their children, the source added.

According to the source, Pitt was hiding behind a scraggly beard for months because he was conscious of how he was aging.

Now, we gotta end this post by stating that we have no clue whether the above report is true or not. Is it factual? Or is it just a rumor? We report! You decide!