Shirtless Brad Paisley? Looking for a shirtless photo of country star Brad Paisley? Sorry ladies there ain’t no such thing. It’s like you are looking for a unicorn. You have a bigger chance of finding a genie in a bottle than a Brad with his shirt off. Which is a shame because there is a hot body hiding in there. [Want some shirtless country singers?]

Anyhoo, in an article a few years back, Ace Showbiz tells us why Brad is not into going shirtless:

Brad Paisley revealed in a recent interview with Grand Rapids, Mich., radio station B93 that he isn’t into nudity and thus has turned down such offer brought to him by Playgirl more than once. “I’ve actually turned that down,” he admitted. “They’ve asked a few times, and no. They can forget it … They ask everybody. They ask every male country singer. Trust me. No way. Not in a million years. That’s just not what I’m about.”

“That’s just not what I’m about,” he claimed. “You know another thing? I’ve got a lot of fans that are teenage girls here and there and I don’t want them buying that magazine. I’m not going to promote that magazine. It’s garbage. I’m sure there are fantastic articles, but that’s not what I’m about,” he went on explaining. “Some things are better left to the imagination, and that’s one of them!”

Okay. Okay. We get what he is saying but we can’t help it but hope he’ll eventually change his mind on the matter. Hehehe. Anyhoo, now that he is expanding his audience via the Rising Star where he is a panelist (is he a judge a-la American Idol or a mentor a-la The Voice), we hope that his co-stars in the show like Josh Groban or Ludacris (both of whom are not strangers to the idea of going shirtless) will influence our Brad to take his top off. Haha. We can dream can’t we?

Since there ain’t no shirtless Brad photo, shall we talk about his cowboy hats instead? Who makes his cowboy hats? What brand of cowboy hat does he wear? And where can you buy a hat similar to the ones he’s wearing?

Well, in 2011 Music Radar tells us that he wears a Serratelli cowboy hat and Serratelli used to make a Brad Paisley’s Official Hat Line (specifically the Official Brad Paisley Signature Serratelli White 8X Beaver Fur Cowboy Hat) but it no longer does according to the site cowboyhatcountry.com. 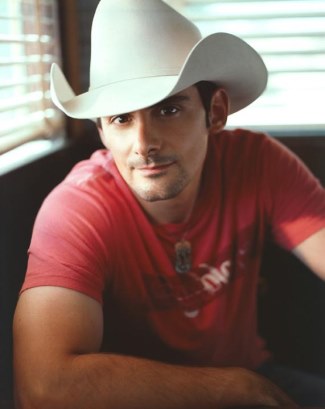 Damn, isn’t he dreamy? If we’re married, we’d ditch our husband for this guy. Haha. Just joking. You can buy a hat like what Brad is wearing at stetson.com.