Bowen Yang Boyfriend: Is SNL Cast Member Dating, Married, or Single? How is Bowen Yang doing more than a month after he joined the cast of Saturday Night Live (SNL)? Well, he’s been rocking it so far and we ain’t just the only ones impressed by him.

For instance, the Twitterati loved his turn as a Chinese trade representative Chen Biao and, most recently, his five-second appearance as a male exotic dancer landed him in Giflandia. Our Grandma Akita says one’s made it if one’s been GIFed so, by this measure, there is no question that Bowen has made it and has found a home on SNL.

Bowen has gotten good reviews from the Uproxx too which had this to say about him, “He’s managed to accomplish some nearly impossible feats in his short time in front of the camera. He’s given us polished impersonations of world leaders and presidential candidates, he’s perfectly encapsulated the kind of woke bro who aspires to be a SoulCycle instructor, and he’s introduced us to China’s ‘Trade Daddy’.”

And here’s what the folks at bustle.com have to say about the 29-year-old SNL rookie: “The writer and comedian showed off some of his comedic chops in Season 45’s premiere when he played presidential candidate Andrew Yang in the cold open, but it wasn’t until the Oct. 5 episode that he really got a chance to shine. Fans couldn’t get enough of Yang’s Weekend Update skit on Twitter, with many already predicting he’ll be a standout this season.”

Bowen Yang Boyfriend? What’s our Bowen’s relationship status? Does he have a boyfriend or partner? Or is he single and ready to mingle? Well, apparently, he is dating playwright Jeremy Harris: 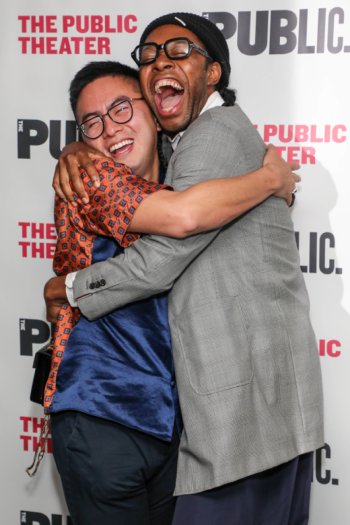 Nah, actually they are not. They’re just kissy-kissy friends and a) Jeremy was joking when he posted this on Twitter and identifying Bowen as his boyfriend and b) Bowen was likewise joking when we Tweeted that they should now start the rumors.

Anyhoo, we will update this post in the future once we do find out if Bowen has got himself a boyfriend. Maybe we should start a rumor that Bowen is actually Tim Cook’s Secret Asian Boyfriend?