Borna Coric Shirtless Part II. We are updating this post, which we last updated three years ago, to note that our Croatian hunk has, to date, made US$7.5 million in prize money. Wooooaaah!

Also, he has two career titles to his name which is pretty cool for a 23 year old guy who is playing at a time when the likes of Federer, Nadal, and Djokovic — all candidates for the title of Greatest of All Time — continue to dominate despite their “advanced” years.

Lastly, the most important reason we are updating this post is actually to add this photo of Borna in nothing but his white Nike performance shorts. Yay. We have no choice but to stan the guy. Doncha? 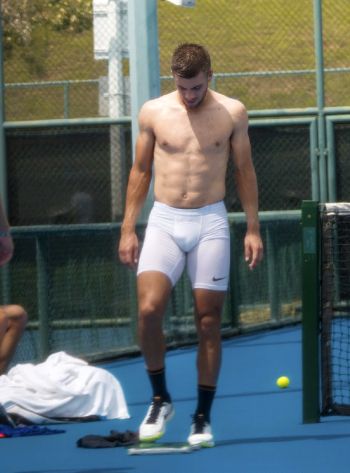 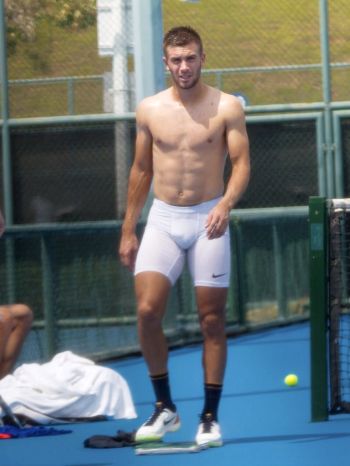 Oh, by the way, the guy used to date a girl named Valentina Miletic but they apparently have called it quits. During a recent guest appearance on the podcast Incubator, here’s what Borna says about the challenges of dating while playing in the circuit:

It’s tricky to start a relationship or even start anything at first place because there are so many things that should be considered — is the girl employed and if she is then she can’t travel. On the other side, if the girl doesn’t have a job that’s a bit suspicious… What are her interests then? It’s really tough. In 2018, I calculated that I was on the circuit traveling 47 or 48 weeks — maybe even more. I know that I was home for only 20 days and it would be like I was home for two days and then on the circuit for two months.

…..
Borna Coric Shirtless, Underwear, Girlfriend, and Tennis Sponsorship Deals (19 June 2017). Is Croatia’s Borna Coric the next big tennis star? He sure looks the part! The tennis player from Zagreb has already beaten two top-ten players — Rafael Nadal at the 2014 Swiss Indoors in Basel, Switzerland and Andy Murray at the 2015 Dubai Championships — and we hope he continues to get more top-ten “scalps” in the future.

Oh, he reached the third round too in this year’s French Open which is quite an accomplishment for an up-and-comer like Borna.

Borna is only 18 years old (he’ll turn 19 on the 14th of November) so he has his whole career ahead of him. He is currently ranked at #33 and, if we are not mistaken, he is the youngest player in the Top 50.

For those of you looking for Borna Coric shirtless photos.

Coric is a fan of Novak Djokovic and would like to follow in the footsteps of the world’s number one tennis player. From The Guardian: “When I’m at my best, I am more like [Novak] Djokovic, game-wise; when I’m not, I’m more like Murray. I think my game is quite similar to Djokovic’s. I move well, I don’t miss many balls, I’m a fighter and my backhand is my best shot. Currently, I’m the best of my generation.”

Hehehe. You can’t accuse this guy of not having that thing called self-belief. And LOL at the big fat shade he threw at Murray. Now, here’s a photo for those of you looking for Borna Coric underwear or Speedo photos. 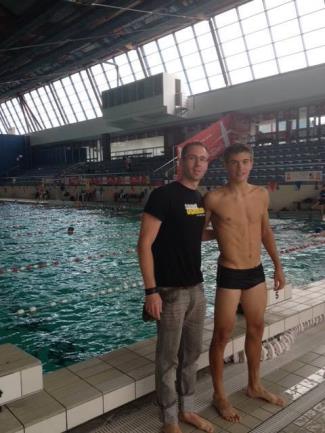 Djokovic, for his part, also sees himself in the youngster. Here’s what The Joker is saying on Coric (via The Guardian): “He’s definitely one of the most talented players in the world right now. Since [beating Nadal in the quarter-finals in Basel last November], you can feel he has matured. He feels comfortable playing with top players. I practised with him a lot in the last two, three months. I try to help him because I see, in a way, myself through him. I’ve never felt that way when I practise with somebody as I felt with him. It’s like playing myself.”

Borna Coric Girlfriend? Is he dating anyone at the moment? It seems like he is currently not in a relationship which is a good thing because you don’t want to be distracted if you intend to make it to the top of the tennis rankings. Anyhoo, let’s end this post with a stretching Borna Coric, shall we? 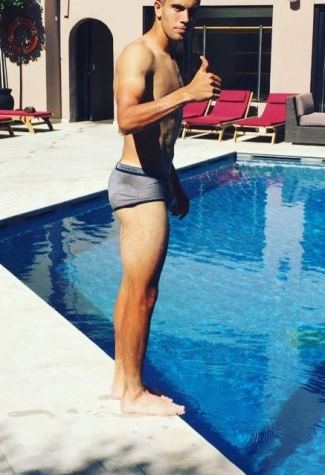