Bonnie Wright Jamie Campbell Bower Engagement: Wedding on the Way? Harry Potter’s Ginny Weasley has gotten herself engaged. No, the lucky man isn’t Harry Potter. Bonnie Wright, the actress who plays Ginny in the movie series, has reportedly been dating co-star Jamie Campbell Bower (he plays Gellert Grindelwald) and the two just announced their engagement. There’s no announcement about wedding dates yet but we hope its sooner rather than later. 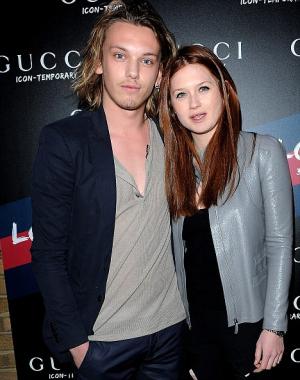 Bonnie’s got a sparkling diamond ring. [Want more celebrity engagement rings?] We are so waiting for this couple to get hitched so that we’ll post about her wedding gown, her designer, and that kind of stuff that “wedding enthusiasts” like us are fond of talking about. 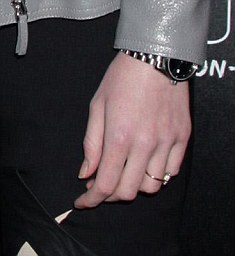 Anyhoo, a source blabbed about the Bonnie Wright-Jamie Campbell Bower engagement and this is what s/he said according to the Daily Mail: “We are all absolutely shocked and surprised and can’t believe that Jamie has asked Bonnie to marry him. They met on the set of the movie and Jamie fell for Bonnie really badly. He says they are completely in love. It all seems very whirlwind, but they both say it’s the real deal.”

The source adds: “All he has told us is that he asked her to marry him and Bonnie said yes. He is chuffed to bits and neither of them seem to have any doubts that they are rushing in too soon. We have asked them if it is for real and they have said yes. They are both very professional, so when they are filming, there is no smooching or playing around. Also they are not really in the same scenes. Jamie is often on the set just to watch Bonnie and spend time with her between takes.”

Congratulations to the two lovebirds. We here at Famewatcher wish you the very best. Did we say that we’re hoping that you’ll have your wedding ceremonies sooner than later? Hehe.

Update: Whatever happened to these guys? Apparently, they amicably called off their engagement back in 2012. Well, these kinds of breaks in relationships is part of growing up so good for them for realizing that getting married is not the right call.