Best Throuple Shows and Movies on Netflix. Okay, this is an attempt to list the shows and movies on Netflix that features some throuple relationships. The list is not exhaustive because — as in the cast of our list on the best Netflix shows for teens — we are only including the ones which we actually personally watched. However, we will be updating this post once we get to see more of this kind of shows.

But before anything else, for the Famewatchers among us who are not in the know, here’s how our friends at Urban Dictionary define what a throuple is: “A threelationship; a relationship with three partners.” 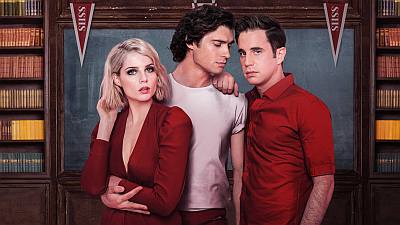 Is the show good? Well, let’s just say that we expected more from a Ryan Murphy project. After all, he is the one who brought us Glee, American Horror Story, American Crime Story, Feud, and Pose which were all well-received by critics. Sure, Glee went on a downturn on the later seasons but it’s first season was deservedly praised by critics and beloved by fans.

Anyhoo, here are our scores:

The Politician (6/10). If you want to ogle at David Corenswet as well as Trey and Trevor Eason then go watch this show. It kinda did not live up to its promise but we are keeping our fingers crossed that it will get better in season 2.”

Insatiable (2/10). Overall, the show scores 2/10 because the main character is the embodiment of annoying and entitled. To us, the only saving grace of the show is the episode where the two Bobs (Bob Barnard and Bob Armstrong) end up in a throuple with the latter’s wife Coralee. Despite the trio’s hookup, things didn’t work out because Bardnard and Coralee realized that they are not really into this unconventional relationship. In season 2, Detective Rudy Cruz attempted to bring about a throuple with the two Bobs but it turned out he is kinda crazy so that went nowhere too.

That’s it for now, watch out for updates as we will rate and rank other shows that features throuples once we get to watch them in the coming days.