Best Jockstrap Brand in the World? And Evgeny Kuznetsov’s Jockstrap. What is the best jockstrap brand in the world? If you are into mixed martial arts (MMA) or high-impact sport such as baseball, the best jockstrap for you could be the Diamond MMA jockstrap. Why? Because it is specifically designed to prevent (or at least reduce) groin injuries. The jockstrap designer, Daniel Goldberg, won an award for it too.

From Entrepreneurs’ Organization: “Entrepreneurs’ Organization’s (EO) Global Student Entrepreneur Awards (GSEA) today announced that Daniel Goldberg, COO & co-founder of Diamond MMA, is the winner of their first-ever U.S. National Competition… Goldberg, a junior from Syracuse University, founded Diamond MMA with a group of athletes and designers to provide protection to competitors in high-impact sports. After viewing “one too many” groin shot time-outs in professional mixed martial arts, the team focused its efforts to develop the best protective gear for MMA and high-impact sports.”

In an interview with the Washington Post, Goldberg tells us more about his jockstrap and what prompted him to design it: “Let’s say you’re playing baseball, and you decide to go from second to third base. You’re running and sliding into base, and the cups are locking in place, and then they completely shift, your cup is on the right, you have absolutely no protection on the left, so the cup is not really covering your whole package and that’s when you’re really exposed. When we first started designing the cup, the idea was to create a cup, that if you got hit in the nuts, you wouldn’t go down.”

Here are images of the Diamond MMA jockstrap which we grabbed from the Washington Post: 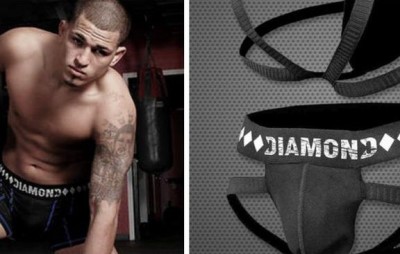 In other jockstrap news, would you like to see hockey player Evgeny Kuznetsov’s jockstrap? Here you go, JockstrapWatchers! Want more men in jockstrap? 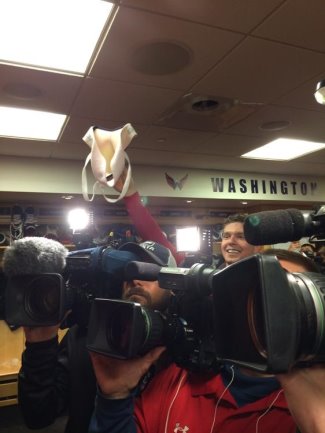 What’s happening here? Why is Evgeny waving his jockstrap for people to see? Apparently, our hockey hunk and his fellow Russian Alexander Ovechkin love to prank each other and this jockstrap-waving is Evgeny’s payback for an earlier Ovechkin prank.

The Washington Post tells us more: “Last week, Alex Ovechkin interrupted teammate Evgeny Kuznetsov’s postgame interview by shouting that his fellow Russian couldn’t speak English. Kuznetsov, who laughed off the friendly taunting, got some payback on Monday when he stood behind the scrum of media members interviewing Ovechkin and held a jock strap in the air. As my colleague Alex Prewitt so eloquently put it, Kuznetsov jock-bombed Ovechkin.”

We’re baffled by the act but we’re not complaining. Ovechkin should one-up his friend by walking around in his jockstrap the next time Kuznetsov is being interviewed by the media. Evgeny will then be ignored because the cameras will focus on Ovechkin. After all, who wouldn’t want to see a photo or a video of a professional hockey player displaying his jockstrap? Like, you know, the hawt Sean Avery.