Prime Minister Silvio Berlusconi’s hair transplant apparently draws a lot of public interest. Anyhoo, since we are talking about the “fun-loving” Italian leader’s successful treatment of his bald pate, we might as well also talk about how it was done.

Here’s how it works according to some guy at the Economist: “THE success of Silvio Berlusconi’s hair transplant, four years ago, relied on the fact that the septuagenarian prime minister had enough of a thatch on the back of his head to enable some of it to be transferred to his thinning top. Although hair transplants have advanced to the stage where they are virtually undetectable (no more plugs of hair), they still rely on moving hairs from one place to another. So, though hairlines such as Mr Berlusconi’s can be thickened up, or even straightened, there may well not be enough material available to lower a hairline to its former, youthful level.”

The Economist guy adds: “Finite supply remains the main drawback of this sort of transplant surgery. The most common form of hair loss in men is ‘male pattern baldness’, characterised by a receding hairline and the thinning of the hair on the crown. It is caused by hormones and mediated by genetic predisposition. Hair transplants work because the hairs at the back of a man’s head are not vulnerable to hormonal attack, and will thus grow quite contentedly in their new home—assuming there are enough of them to transplant.”

So for a hair transplant to work, you must have enough hair to be transplanted and your hormones must not attack the new transplants.

Let’s take a break from blogging about hot Turkish men to talk about our favorite international politician aka Italian Prime Minister Silvio Berlusconi.

We didn’t realize that our Silvio, like Irish actor James Nesbitt, had a hair transplant so when we found out that he did, we went “Hey, we must blog about that.” Anyhoo, here’s Silvio’s before and after hair transplant photos. Oh, and we’re calling him a male hair transplant model because all we do here is blog about models. Hehe. 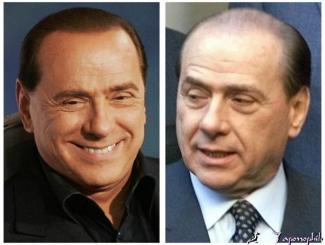 That’s a good enough reason for us. Now if only Silvio can convince his Russian counterpart Vladimir Putin to have a hair transplant too.

UPDATE: If you are wondering why Berlusconi is our second most favorite world leader, this video of him “playing” hide and seek with Germany’s Chancellor (?) Angela Merkel is one of those reasons.

And this video of The Queen chastising the Italian leader is a classic that adds to his likability factor.

Sure he is the new George W. Bush. His gaffes in the world stage gets him into a lot of “trouble” but we should thank him for making us laugh. At least his mistakes are less harmful to the world than Dubya’s. Oh, and he’s got good transplanted hair too.