Ben Cohen Underwear, Shirtless, Playing Rugby, and His Gay Fans. Hey, did you know that rugby player Ben Cohen once held a gay fan appreciation night or something like that? Yeah, we didn’t know either. But its good to know that the hottie with a hairy chest appreciates his fans. 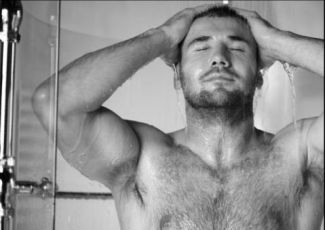 His 2008 interview with Outsports talking about the event and his fans is after the jump. 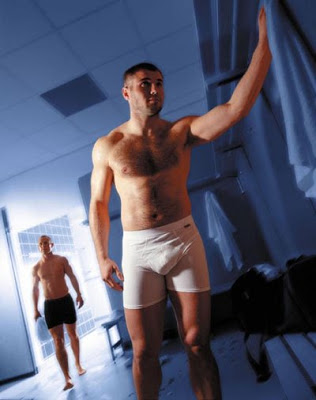 Outsports: How did the idea for a gay fan appreciation night come about?
Ben Cohen: Over the past few years, since we won the World Cup in 2003 really, I have been receiving loads of letters and e-mails from guys. Some of them were very graphic!

At first I didn’t think much of it, but then I thought, well, if these people are taking time to write to me and are asking for more pictures etc. and they come and watch me play, then I need to give them the support they give me. So I just thought I would take notice of what they were asking for and acknowledge the fact that they were there and supporting me. I have also noticed that they seem to be very loyal and support me through the bad times as well as the good.

Outsports: What has been the reaction to the idea so far? Have you been surprised by the reaction?
Ben Cohen: I just noticed that I was getting more attention. My website stats were shooting up and when I looked where the links were coming from, I could see that 90% of them were from gay blog sites. The biggest surprise I got was knocking David Beckham off the top slot in the Sunday Times Gay Icon list. I was gob smacked quite frankly.

Outsports: What has been the most unusual reaction you have gotten?
Ben Cohen: I think I have just been really surprised at the number of gay men who are supporting me and also the fact that they are more interested in me and not just what I am doing on the [rugby] pitch.

Outsports: What has been the reaction from your teammates and others in the rugby world?
Ben Cohen: They are pretty cool really. It is a really busy time in rugby at the moment with European as well league games and of course the Six Nations [tournament] is about to start in a few weeks so we mainly talk about rugby.

I have just started to play for a French Team, Brive, and I don’t think they really know too much about my fan base. I haven’t quite mastered the language yet so I am not really sure what they are saying most of the time!!

Outsports: Is elite-level rugby ready for an openly gay player?
Ben Cohen: I am just one man with my own views. My impression is that it would be fine to be able to ‘come out’ in rugby. Most rugby players are cool about it and think that people should be allowed to live their lives how they want to, but I can’t speak for everyone.

The key thing is the individual needs to be able to take the pressure of top-level rugby and the knowledge that his teammates know he is gay. I don’t know for sure, but my feelings are that if he were completely open about it, after the first bit of banter, things would calm down. We all take banter all the time about different things. It’s a bloke thing, isn’t it?

Outsports: If an active player were to come out, where would the most opposition come from: fellow players? Fans? Media?
Ben Cohen: Would there be opposition? This is the 21st century. Or would [the question] be where would the most interest come from? The media I would suggest. The players and fans would be more interested in his standard of playing I would suggest.

Outsports: Have you ever had a teammate who you knew was gay and how did you come about this knowledge
Be Cohen: No, I haven’t.

Outsports: Do you have gay friends or relatives and what has their reaction been?
Ben Cohen: One of my aunties is a lesbian and lives with a female partner. We are all laid back about it because it has always been the same. I grew up in an open-minded environment because my Dad worked in the nightclub industry, so it has never been much of a shock to meet up with a gay guy. I am more interested in the personality of the person than what their sexuality is, and whether we can have a good conversation. I like a good chat.

Outsports: A fun question: Imagine for a second that you were gay. Which player (current or former) would you ask out on a date and why?
Ben Cohen: Sorry, can’t do that, but I can see why people think that someone like Jonny [Wilkinson] is attractive. You would have to be blind not too. He is a good-looking guy and keeps himself fit. He’s also a really nice person, which is what really matters.

Outsports: What input did your wife have in picking the calendar photos?
Ben Cohen: Not a lot really, I tend to keep my family very separate from my work. She is always interested in what I am up to but on this occasion she was pretty tied up looking after our newborn twins so didn’t really get involved.

Outsports: How long do you plan on playing and what are your plans for after your career ends?
Ben Cohen: I probably have about 5 years playing time left and I want to achieve as much as possible in that time. I am enjoying the new challenge in France and am working hard to improve my rugby and consistently get over that try line.

After rugby? I have a number of business projects that I am involved with so I will be helping to develop those and see where things take me then. I may get involved with some coaching as I would like to give something back to English rugby, but that may be on a voluntary basis. So, my plans are not concrete yet but my focus is on my rugby right now.