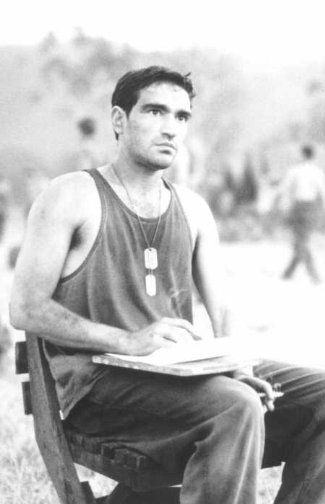 Aside from The Thin Red Line, other movies our Ben starred in include the 2001 comedy/crime thriller Birthday Girl where he plays husband to Nicole Kidman’s mail-order Russian bride. Some photos of Ben in his blue Y Front briefs from Birthday Girl. Those of you who watched the movie may want to tell us why he’s tied down to a chair like this. 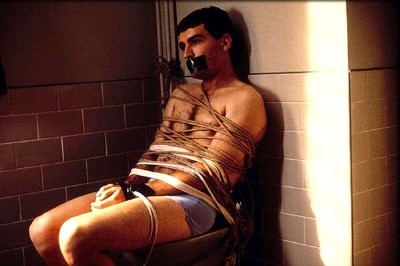 Did he manage to free himself?

Ben Chaplin Gay Kiss With Ben Barnes. Our Ben also starred in the 2009 film, Dorian Gray, with another English guy named Ben, i.e., Ben Barnes. [For more of Barnes, check out our earlier post about him Ben Barnes Leather Jacket.] Chaplin plays Basil Hallward who painted the portrait of Dorian Gray which is played by Barnes. The two Bens (or rather the characters they play) apparently make out in the movie.

What do the actors say about kissing a dude? Here’s what Barnes says about it in an interview with Metro UK:

What was snogging Ben Chaplin like?
Stubbly. He’d snogged a man in a play before. He said: ‘You might be nervous now but when you see it on film you’ll be proud of it, it’s something to overcome.’ It didn’t register any differently to seeing myself kissing anyone else on screen.

Chaplin confirms that he kissed another guy in an earlier movie role in this interview with rte.ie:

Shooting your homosexual love scene with Ben Barnes, how was that?
Ben Chaplin: Poor Ben was dreading it a bit I think but for me the thing is I’m an old slag, I’ve done it before and it’s never as hard as the first time, if you pardon the pun. I’d done it with Billy Crudup; I’d had a kissing scene with him six or seven years ago [2004’s ‘Stage Beauty’]. The funny thing is I’m actually quite proud of that scene with Billy so the main thing is to look like you’re not embarrassed, to look like you want to.

So you make slightly inappropriate jokes and you get through it as quickly as possible. I’ve definitely kissed less attractive people so it was perfectly pleasant. Not the best kiss I’ve ever had but certainly not the worst. He’s got such soft puffy lips it’s like kissing the marshmallow man, it’s like an airbag, you could fall from a great height onto his lips and still survive [laughing], so it’s not a problem!

Here’s a pic of Chaplin and Billy Crudup from the movie the former is referring to above, Stage Beauty.

Now if you want more of Billy go check out an earlier post we wrote about him: Billy Crudup Underwear & Watchmen Blue Balls.

Is Ben Chaplin Gay in Real Life? Given his gay roles, is our Ben gay or straight in real life? He is straight! And, according to Google, he’s been dating girlfriend Rocio Oliver since 2009. The two may have secretly tied the knot according to frostnow.com. However, there has been no confirmation from either Ben or Rocio’s camp on whether they really got married.